U.S. President Donald Trump agreed to setup safe-zones in both Syria and Yemen after he held a phone meeting with Saudi Arabia on Sunday, the White House media wing claimed.

While not many details were given regarding these safe-zones, it appears Trump is attempting to take a more active role in both Syria and Yemen, despite his inexperience in Middle Eastern affairs.

Unlike Yemen, setting up safe-zones in Syria will be difficult, given the Russian Air Force’s dominance over the country’s airspace.

Saudi Arabia and their Arab allies are the only countries bombing Yemen, so this agreement will likely not have much impact on the current conflict plaguing the country.
Share this article:
ALSO READ  China deploys 10,000 additional troops to Indian border: report

To keep their terrorists safe I assume.

The US has made such a mess in the whole of M East , such amount of ”biblical” upheaval , such enormous disaster in lives and material damage through their proxies , that any more ”humanitarian” involvement , treading on such traces of destruction , is bound to create more of the same. The US Army and Air Force have neither the attitudes , nor the credibility for that , after the hurricane of upheavals they launched upon the region. Trump wishes to show activism on the world stage and keep his military-industrial complex dogs at bay by throwing them… Read more »

US are seen as pussies : the Mongols would have killed much much more 😀 The east-Aleppo’s “emir” actually compared the SAA rush to free the city to a Mongol-style attack. Actually, to be respected, US militaries should have done it Genghis Khan style (100% irony/cynicism if some do not understand) 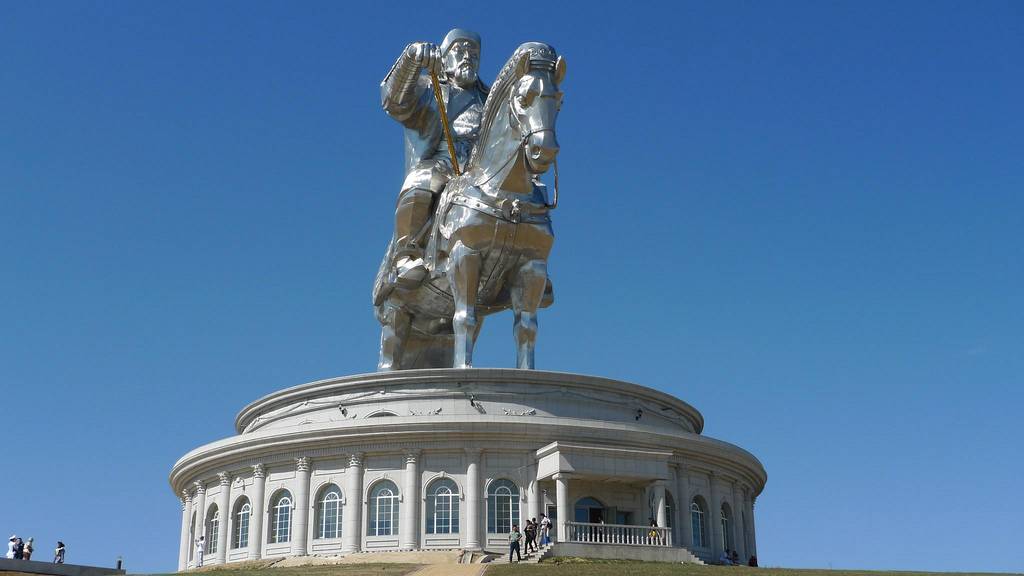 How to definitively f**k any caliphate project?
Unite EU+Russia and maybe even China and think about it :
http://www.paradoxplace.com/Insights/Civilizations/Mongols/Mongol_Images/Maps/1246-1259-Mongke-Khan-BR800.jpg
http://i.imgur.com/5ZkzGnV.png
So either all these bearded loonies definitively renounce their crazy projects or else…
No surprise all those with real understanding of geopolitics wants EU and Russia build tighter links : nobody could even dream of competing such an alliance 😉
Actually, nearly all Iranians, Turks, Iraqis and a bunch of Syrians are as Mongol as they are or Arab ascent! Mongols were simple in their ways : they killed ALL males…

This will be an annexation of eastern Syria by Saudi Arabia with a no fly zone enforced by the US Air Force and de facto legitimization of ISIS. Convenient that this annexation shall include oil production areas.

I say no safe zones. No Saudi or US intervention. The United States is declaring war on Syria with an invasion by stealth. All US forces inside Syria are now enemy insurgents.

For now, the only no fly zone being in force is the Russian one. Seems that Saudi version isn’t talking of safety zones, it may totally be a joint US+Russia effort with Saudis telling their proxies to not touch these zones for any reason. We’ll see soon : Saudis are actually even fearing a coup in their country, as many princes are taking prolonged holidays on their yachts. They seem to fear their own clergy : if they played Dr.Frankenstein creating the Mudjahideen in Afghanistan which ended under the Brotherhood’s control thus becoming Qaeda, things got out of hand and… Read more »

Is it really a bad thing when Obama was the one trying to f*****g get rid of Assad and trying to hurt relations with Russia? You must be retarded to think Obama was better.

Palestine never existed, everyone arguing for it has already admitted it, they just hate Jews, that’s why they’re pretending that it’s real.

1. Jerusalem is not “occupied”

2. It’s Hamas and the PA destroying “Palestine”. Make peace with and accept Israel, then it won’t be “destroyed”.

Yup : from an international law point of view, it’s Gaza and parts of Judea-Samaria that are occupied by Arab non-state actors! The legal map is this : http://www.mythsandfacts.org/conflict/mandate_for_palestine/1922-mandate_for_palestine.jpg Arab “Palestine” is east of Jordan river. Israelis have agreed to a project where they trade land for peace and there is no peace, thus, no treaty having been signed as the leaders of the artificially created “Palestinian People” have ALWAYS refused such treaty, this land stills absolutely belongs to Israel, including Golan Heights and Gaza. Like it or not, no other treaty than the 1922 one values until something else… Read more »

This is bullshit of course, but I understand you as a Jude (sorry I mean “French”, LOL) have to do this.

A mandate does not make You a legal owner. So the British mandate of the League of Nations did not include the permission to give any land to any non state entity or state. So what treaty was signed in 1922 with what legal permission. The ex-colonial Lords of Human Kind made a mess. p.s. The Sykes–Picot Agreement and the Balfour Declaration have killed millions during the last 100 years. BTW. There should have been a referendum in the 1920ties – not a war in 1948. Missed chances.

You realise that the UN gave every Arab nation their borders, that’s the only reason that Saudi Arabia, Jordan, Syria, Iraq etc. cover the land that they do. The same is true with Israel. You can’t complain about Israel unless you complain about the rest of them.

Sorry for the misunderstanding. The UN exists only since WW II. I talked about the time after WW I. OK? p.s. Even following Your argument. Not the colonial powers in this case French and British politicians but a referendum of the native population soon after WW I should have decided over the borders in the region: Israel, Palestine, Lebanon and Jordan maybe even Syria. BTW. KSA has no part of the Holy Land of the Bible?

OK, retard, ok. You learn some history, stupid english man. You invented the first concentration camps, for example. You killed tens of million people around the world. You created IsraHell ghetto. You are the biggest evil on the planet.

1. Jerusalem is not “occupied” but conquered.
2. Israelis and Palestinians work on destruction.
3. Did You?

How convenient that Trump’s Jewish son in law is now Trump’s advisor on middle east trade. As if Trump’s business empire propped up by Saudi investment money is not already a conflict of interest, his son in law Jared Kushner appears to have negotiated this safe zone as a discreet trade deal with Saudi Arabia.

For a US President to indulge his nation in a conflict for personal gain is an impeachable offence.

As Clinton’s pay-to-play or Bush links into Carlyle Group, Enron, Halliburton, etc… USA is not Europe. Even Fedbank is a conflict of interests, LOL! Thus, Fedbank should be put in charge of Saudi desert : soon there’d be no sand in!

LOL. Yes the sand would be there plus they would have issued bonds for 100 times its value and bought the US another fleet to patrol the desert.

What has Zionism got to do with this?

Come up with a proper decent argument for once please, rather than constant insults 🙂

Some here cannot I am afraid – it is even worse when discoursing about Yemen or Ukraine. Plain uninformed, not keeping netiquette, can write but not read to understand.

It was done as a business deal, the Wahhabi rats must have said we accept safety zones in Yemen if ALSO in Syria..this makes no sens Trump wanted stop US interfearing in Syria.

These are no-fly safety zones in the ISIS caliphate covering the oil producing regions of Syria. They amount to US legitimization of Saudi backed ISIS terrorism.

Do Americans actually support this or are they just ignorant of the implications?

KSA doesn’t backs IS, they actually back things like Ahrar or Jaysh al-Islam which fight Jund al-Aqsa and JaA is an IS sub-group.

KSA government does not back IS but Saudi private persons. IMHO.

What KSA has to do with internal affairs of the sovereign state of Syria? Donald Trump seems to be demonizing Iran which has been one of the main allies of Syria and Iraq in their struggle against Saudi-Turkey sponsored terrorism. Whether it will happen or not is far less relevant than a fact that Donald Trump thinks it’s viable solution to ME crises. US policy of zero regard for sovereignty of other countries which are not allies of US has seem its continuation in Trump’s presidency.

Did he talk to the legitimate representative of Syrian people Bashar Assad or anybody from his cabinet?

Stern Daler
Reply to  #3AM

The US in their exceptionalism do not have too. At least they believe this.

Saudi Arabia one of the main financiers of all the de-stabilization in Syria to set up “”Safe Zones”” in Yemen for Syrians??? A country that Saudi Arabia and America is bombing the h**l out of. Who is having a laugh here.???

The two clown nations. How on earth do they enforce a safe zone with no air superiority? Only unsafe places are under jihadist. Trump is proving to be a monumental disaster.

Pampering the Jewish part of US electorate. So?

Can someone reading Arab can verify the Saudi version? Some say there’s nothing about safe zones. Sounds more like a meaningless announcement than anything else. Now, Trump should take good care : he barred entry to the US mostly for ctizens of Shia countries while be it Qaeda or ISIL, these are Sunni extremists… Now, one thing is clear : either Bibi makes a fuss about Iran for domestic policy purposes or as a t*t-for-tat to Khamenei heathen rhetoric which is mostly a treason when you know how much Israel helped Iran or he has came out of his mind… Read more »

Ok, but that begin with meaningless announcements, and after playing on the words, there is a full war like in Yemen, against civilians.