US to sell 7,500 precision-guided bombs to Saudi Arabia

Rumors spread by Syrian opposition activists and anti-government news sites this week claimed Syrian President Bashar Al-Assad was dying in Damascus, despite no word from his media office.

These rumors were then reported by several western and Turkish news sites, causing many people outside of Syria to believe these claims.

Al-Masdar News spoke to a source close to the Syrian President on Sunday evening in order to validate these rumors.

The source told Al-Masdar that all of these rumors were false, including an alleged coup that was taking place in Damascus.

Periodically, Syrian opposition activists and anti-government news sites start rumors about President Assad, despite the fact these claims are often lies that have no truth to them.
Advertisements
Share this article:
ALSO READ  Surprise militant attack leads to heavy clashes in southern Idlib

Since the news has no bearing on Damascus or Syria what is the point unless its to p**s everyone off who stands behind an Assad Regime, or those who feel better at his demise. Either way they the two parties have no effect on the country. For Russians communicating with Assad this must be a laugh riot. This kind of propaganda is a waste of resources.

Daeshbags Sux
Reply to  So what

Well, the same style of idiots also said the attacks have destroyed Paris or Brussels. Strange as : Princes Noor of Iran ate at the Eiffel Tower restaurant on 2017 new year’s eve : http://www.noblesseetroyautes.com/wp-content/uploads/2017/01/sans-titre.png Paris seems intact in the background… Well, she deserves a crown and a queen job! http://www.chezbertrand.com/SHARED/nouvel-an-paris.jpg http://media.rtl.fr/cache/ililEFyMjfonfYreaJTRaw/795v530-2/online/image/2014/1104/7775167946_la-tour-eiffel.jpg They’ll have a hard time to destroy Paris : We and nature regularly try to destroy Eiffel tower : http://media.rtl.fr/cache/ililEFyMjfonfYreaJTRaw/795v530-2/online/image/2014/1104/7775167946_la-tour-eiffel.jpg http://www.sosvideo.fr/uploads/thumbs/ed56870e6-1.jpg As we consider to replace the old lady by a Paul McCarthy’s “tree” : http://www.francetvinfo.fr/image/750nqbdmx-44fa/1500/843/4929375.jpg But higher than Burj al-Khalifa… Thus, some have decided to defend her… Read more »

Hahaha
Reply to  So what

“who stands behind an Assad” you mean Russa’s and Iran’s peanises dangling from Bashar’s b**t?

“prove false” !
I have a “proof” that the moon is made of cheese. I spoke with Niel Armstrong and he confirmed it to me.

I think you need to check the meaning of proveproof in a dictionary. 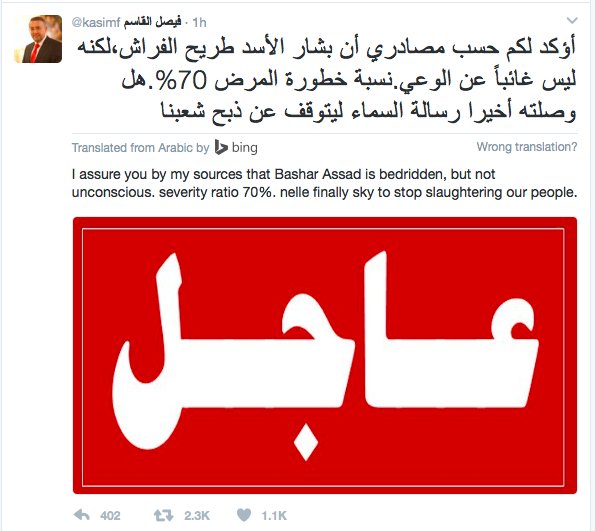 “Stop slaughtering our people”
=> Many Qataris? Many MB roaches?

So what
Reply to  Daeshbags Sux

Bush on the pig pic is the w*f pic of the day. Thanks for posting.

This website is NOT Syrian propaganda. Here on this website, we say ONLY the truth, and we do NOT lie about the Alasaad regime’s (more like an occupation) crimes….. Not!

So what
Reply to  The Truth

I understand that. AMN is critical source of news and I can see why they would put this out. Its a story of a story written by bafoons looking for attention good or bad to smear Assad. My comment was more a smear of the smear campaign than a critique of AMN. Sorry for the confusion.