Different jihadi groups fighting the Syrian government have been increasingly recruiting children soldiers as the conflict sweeps the war-torn country for the sixth year.

Since the Al-Qaeda franchise in Syria, Jabhet al-Nusra, established itself in Syria in January 2012, child recruitment has become more widely practiced, and even got wider and more organized with the emergence of Islamic State of Iraq and Syria (ISIS) in 2013.

The two ultraconservative groups created training camps for children where they are brainwashed and instilled with Takfiri ideology to become jihadi fighters and suicide bombers.

The process significantly increased with the Nusra-led Jaish al-Fateh taking over the northwestern province of Idlib in May 2015.

In 2013, al-Muhesini launched his wide-scale recruiting campaign in Idlib (which later expanded to the northern countryside of Aleppo), and set up a boot camp dubbed (Callers of Jihad).

Propaganda leaflets and stickers that promote ‘fight against the infidels’ have proved crucial for the campaign.

Analysts estimate the number of children who joined al-Muhesini of around 1000 children – some even came from refugee camps along the Turkish borders – each paid $100 monthly salary.

While the media has constantly focused on child recruitment by factions internationally designated as ‘terrorist groups’, it – the media – has totally ignored those recruited by ‘moderate rebels’ across the country.

In the central Syrian city of Homs, a child fighting armed rebels was filmed beheading a captured Syrian officer with a machete in December 2012.

Which should be a very good hint that the rebels are on the ropes.

“the notorious Saudi cleric Abdullah al-Muhesini as the godfather of recruiting children soldiers”
Doesn’t seems to look like a cleric : 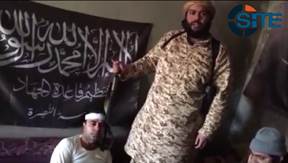 The U.S. hired children in Colombia to fight their wars against the FARC. U.S. never changes its foreign policy.

Lavrov And Kerry Must Be So PLEASED To See This!!! Well Done!!! Will Be Even More Pleased When Kids Below The Age Of 10 Shall Fire Weapons AT WILL!!!

@leithfadel risking life for peanuts? Pay them at least $3500 dollars minimum per month.

so there are zero child soldiers in hezbollah, SAA and their militia? ….well they didnt said something about this ……i guest they dont want to admit, that they dont care on their own side…
after all i saw allready kids-fighters in iraqish state-militia, in the hottest phase of IS-iraq war…but here noone talk about this stuff….

The american assault rifle in the little b*****d hands looks like new delivery from us
So they will die young.

It is a austrian assault rifle (steyr aug). We can not find the supplier with this.

Must be nice to sit in your chairs and b***h about this. This is not a child army, but youth resistance. What is Assad offering them but death by barrel bomb? If I was 13 again and in their situation, I would use the C-note to buy bullets!

You actually condone this? Way to prove how the west looks the other way when it comes to terrorism that isn’t “isis”.

Timothy, that sounded better in your head, didn’t it?

I believe he would be at school if not for this imposed war!

all those news of assad’s atrocities are belted out by the western and anti Syrian news like Aljazeera.

assad is most loved by his people. otherwise why would Syrian living overseas flocked at their embassies to vote?