During a press conference on the sidelines of 24th Iran International Oil, Gas, Refining and Petrochemical Exhibition dubbed “Iran Oil Show 2019”, Iranian official Saeed Mohammad said, “Planning is underway for setting up a joint bank between Iran, Iraq, and Syria for restoration of banking and financial relationship in central banks of the three countries.”

Since the implementation of the Trump administration’s sanctions, the private sector has promised to cooperate and collaborate with the Khatam al-Anbiya construction headquarters in order to fill the vacant place of foreign companies in the Iranian oil industry, he added.

Turning to the Persian Gulf Refinery project, he said, “Despite many ups and downs facing ahead, this giant project was put into operation by domestic engineers.”

He put the annual requirement of the country to the products of downstream petrochemical industries at 20 million tons.

He pointed out that U.S. sanctions will have no impact on the activities of the headquarters.

Mohammad pointed to Iraqi and Syrian markets with high potentials and called on industrialists and economic activists of the countries to adopt a logical approach and get the lion’s share of products in lucrative markets of Iraq and Syria.

Salib al-Hussaini said on April 12 that a summit will be held between the Iran, Iraq and Syria to further discuss the project of the transnational rail between the three countries, according to the Arabic-language al-Sumeria news website.

ALSO READ  Hezbollah is preparing to respond to Israel killing its member in Syria: analyst

He made the remarks on the sidelines of the joint Syrian-Iraqi committee held in Damascus, a week after Iranian First Vice President Eshaq Jahangiri spoke of an initiative to link the Persian Gulf to the Mediterranean.

“We will connect the Persian Gulf from Iraq to Syria and the Mediterranean via railway and road,” said Jahangiri, making reference to the construction of a railway linking the Iranian Shalamcheh border region to the Iraqi city of Basra.

Observers have described the new agreements as a sign of Baghdad’s serious intention of not being “party to the system of sanctions against Iran” as Prime Minister Abdul-Mahdi said earlier in February.

Good for these 3 countries. Eat your heart ou Neocon/Zionist Racists.

As an Israeli Zionist, I have no problem with a railway between the three countries. I know Israel already has plans that, should things change in the Middle East, the Jewish State would be only to happy to run trains to Iraq and Syria. As it is now, road transport takes far too long.

Is that the best answer you can come up with?

What are we supposed to respond ? your claims are as unrealistic as they are off-topic anyway, too much disconnect with contemporary realities so the first reflex that comes to my mind too also be to dismiss what you say as irrelevant,I’m afraid it’s only natural. For what you say to happen ,Israel should give back what it stole to Syria and stop attacking its sovereinty without ever being attacked. That would be a good start that will never happen. So no ppikt in arguing a moot point.

The question : will there still be an Iran, at least as we know it, for the inauguration?

it will outlive you ,to the very least,rest assured.

Peace is the biggest victory. You may win the battle, but not the war. 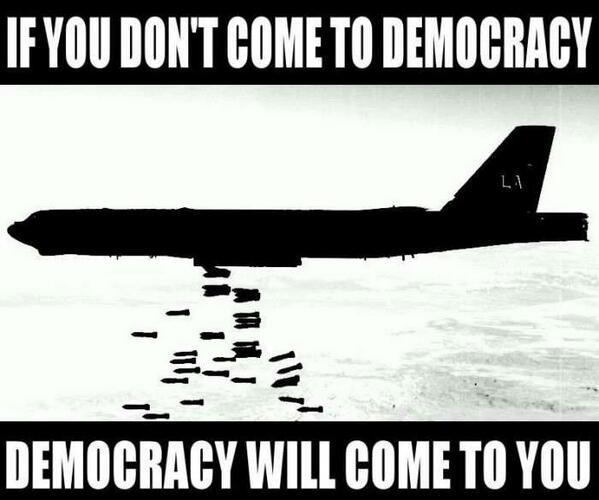 you realize this was supppsed to be anti-US satyre ? and that using it the way you do either means that your are abysmally dumb to the point of not even comprehending the most basic forms of irony, or that you actually do,in which case that simply makes you a bloodthirsty,cowardly fascist idolizing mass destruction from the satefy of his screen-lit armchair. I wonder which is worse. You are pathetic on both counts anyway xD