BEIRUT, LEBANON (11:00 P.M.) – The Ansarallah forces (var. Houthis) announced on Friday, the killing and wounding of many of the Saudi-backed Yemeni Army in clashes in the Marib, Al-Jawf and Saada governorates of northern Yemen.

The spokesman for the Ansarallah-aligned Yemeni Armed Forces, Brigadier Yahya Sari’a, said in a statement on his official Facebook page: “Our forces were able to deal with five attacks, including an attack at the Sirwah District of the Marib Governorate (northeast of Yemen), that were done during which we destroyed four armored vehicles with guided missiles.”

According to Brigadier Sari’a: “A number of armored vehicles were destroyed. Dozens of the dead and wounded were killed in the ranks of the enemy, and forced to retreat and break, and no progress was made.”

The military spokesman pointed out that “during the past 24 hours, the war of aggression launched 35 air trikes, 27 of which were attacks on the directorates of Sirwah, Mazr and Madghal the in Marib Governorate, and 8 raids on the districts of Khub and Al Sha’af in Al-Jawf Governorate.”

Yemen’s Ansarallah says forces are ready for operations against Israel

The Saudi Occupational Regime illegally occupying (an absolute dictatorship, a totalitarian regime, an absolutist monarchial regime, with not even one single iota of democratic institutions and democratic credentials) the long-suffering land of Arabia and subjecting the population to the Saudis’ salafist and waHaHaHaHabi degenerate nonsense (which is very much anathema to Islam), hence this degenerate diabolical demented despised despicable debased debauched demonic terrorist-financing terrorists-arming terrorists-enabling regime must be destroyed no matter what the cost and no matter what the consequences, completely and totally and permanently. Kill ’em all. Good hunting, Houthis. We the People the world will support you to… Read more »

Once the Houthis have taken complete total permanent control of all of Yemen, I repeat all of Yemen, north to south, east to west, every single province, they’ll turn their attention to destroying the Saudi regime illegally and brutally occupying the long-suffering land of Arabia, and then they’re going to liberate Jerusalem. Be aware all jews and all zionist-mafia occupying Palestine today : you better run while you have time, because when the Houthis and Hezbollah and the Syrian military forces and in the Iranian military forces and the IRGC and the Quds Force and the Iraqi PMUs arrive in… Read more »

Meanwhile, Houthis don’t publish their losses… Any idea of what damages a F-15E doing an air-strike inflicts with such a payload? : 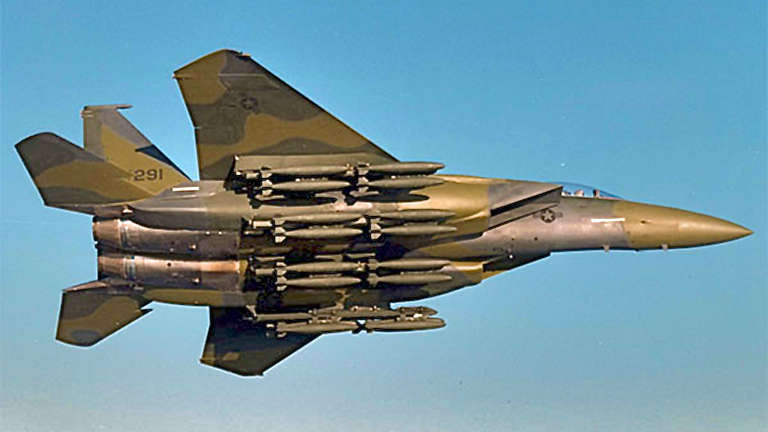