Houthis is using Iranian-made drones to bomb Saudi Arabia: US

Haftar heads to Egypt to coordinate against Turkish intervention in Libya

India’s Prime Minister Narendra Modi announced the launch of an Indian-Russian assault rifle production plant at Korwa, during a speech in the nearby town of Amethi on Sunday. The site is due to produce AK-203 Kalashnikov assault rifles for Indian security forces, according to TASS news agency.

“This joint venture will be beneficial for us,” said Modi during the ceremony, adding that “at this moment I thank our nation’s closest friend Russian President Vladimir Putin for this venture.”

The compound, jointly run by India’s Ordnance Factory Board (OAB) and Russia’s Kalashnikov Concern, is licensed to produce up to 700,000 AK-203s, as TASS reports.

Another Russian step into the international weapons market.

India is Russia’s #1 export client for very long, thus US have managed to take 15% of the Indian market. IMHO, Modi does a political move through this since :

– India has rejected Su-57 despite co-funder at 50%. Rafale is stealthier
– MiG-21 and MiG-27 will be replaced by domestically built Tejas
– India already backed out of the Il-214/276 co-funded project

Tejas will receive the French Thales radar and soon will be tested with the 98kN version of the Rafale’s engine which will help on Tejas’ two flaws :

Dassault already provided the modified blueprints in 2017. They’re also teaming with ADA/HAL for the AMCA which is scheduled to replace Flankers in the Mid 2030’s

@Daeshbags Sux, not lack of thrust but US sanctions resulted into a switch. That led to French involvement as development aid. Currently they have plans for the stronger GE’s F414 to be manufactured in India under a technology transfer arrangement.

Strange since India produces her own riffle, the INSAS : 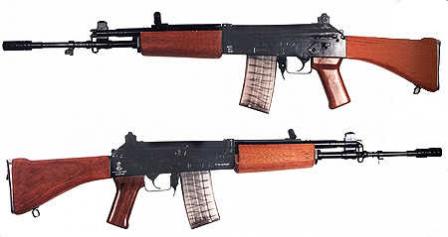 If one wants something with more kick, 5.56×45 allows to switch to .243WSSM which is probably the most interesting cartridge for an assault riffle, even if not so massively available as usual calibres.

In place of this, using .243WSSM, you’d just need a single modular bullpup assault riffle to switch the types of barrels according to needs…

Then add a single bolt-action riffle since you may need an ultra accurate riffle, e.g. to help liberating hostages. With a 64-65cm barrel, .243WSSM is more accurate than .300winch-mag at 1km

They simply could use a design that now is publc-domain, e.g. Steyr Aug or FAMAS and customise it to all actual bells and whistles.

@Daeshbags Sux, no. You do not get loans and/or know how sold on a public domain weapon…

BTW: Mon cher, No idea who votes down on interesting specialist contributions. Guess the votes are not about the contributions but personal. This is IMHO contra productive.

Thales-Australia has created a modernised Aug for the Aussie+NZ Armies with all actual stuff : Picatiny rails, polymers, etc…

They’ve been upgraded in 2010 with rails BTW 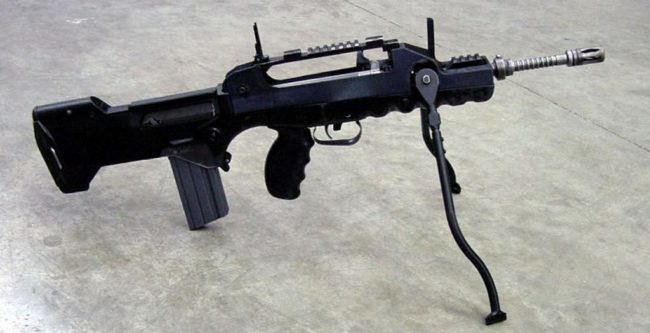 Stern : “BTW: Mon cher…/… This is IMHO contra productive.”
=> They lack IQ and knowledges to be able to argue. I don’t care about thumbdowns from terrorism fanboys

@Daeshbags Sux, unproductive since it makes valuable posts sink and stigmatized – so they are
less likely to be read.

When it comes to know-how, Indian ARDE was established in 1958 and Ordnance Factory Board in 1802 and has a $3bln annual revenue w.164k employees.

What’s the point about importing or license-building AK-203 or other firearms while OFB, ARDE and DRDO are very competent?

Simple! Corruption and bribes on military brasses! And the worst is when the Congress-party rules : Rahul Ghandi is for sale, hehe!

@Daeshbags Sux, graft is a possibility I did not think of. But maybe it is also the kick a notorious scrounger gets from getting a financed factory. 🙂

Look, for the Tejas fighter-jet, the AF went up to ask for 31 mods in a single year, then asked for their contrary the next year!

The last trend in the AF : since now they access Rafale, they want modular engines everywhere…

…Errr, only Safran can do it! Don’t hope Saturn or Klimov deliver such for Sukhois or MiGs in near future!

Indians are even worst than the French or the Jews when it comes to haggling or paltering 😉 It can last forever!

Hey, 11 years to decide between 6 fighter-jets in order to purchase 126 units then 4 years more to have a contract of 36 units 🙂

@Daeshbags Sux, You might be right about the Indian army. But the Indian source I pointed too, Indiatimes, speak of the use of AK-47 by frustrated forces fighting insurgency e.g. Central Reserve Police Force, the world’s largest group of what I’d compare with WW II Ornungspolizei.

DBS, Indian Rifle INSAS has a lot of chronic issues gun jamming, rifle going into automatic mode when it was set for three-round bursts and oil falling on a user’s eyes during combat operations.

The Military was looking out for suitable alternate for long time. Among the various options available Indian Government went along with Kalashnikov Russia. This replacement was long pending & overdue.

DBS, Indian Rifle INSAS has a lot of chronic issues gun jamming, rifle going into automatic mode when it was set for three-round bursts and oil falling on a user’s eyes during combat operations.

@Daeshbags Sux, INSAS has a reliability problems. Plus INSAS incapacitates mainly – bad against insurgents – who use AK-47 optimized to kill. So many Indian forces use other rifles.

They already have replacements for INSAS : MCIWS and Excalibur, I know the issue 😉 Insurgents are not regular troops, you can use hollow-points

THIS is optimised to kill, no matter the calibre.

@Daeshbags Sux, while you legally can – you must keep in mind that they were banned as inhuman.

AFAIK, MCIWS has indeed found interest with the para military services. But INSAS based Excalibur was only traded as an interim assault rifle until a suitable replacement was found for the army.

But is Putin’s wife Bashar Assad hanged? Not yet?

It’s VERY easy to destroy Islam! Just vaporise the Ka’aba+Black Stone. No need for a nuke, a good thermobaric is enough for the job.

Russian women will work to death, the Russians will work ten years after their death.
Why? Because Putin spilled Russian money on the Assad dictatorship.

Ridiculous : Russians are too drunk to work. Moreover, 36% of Russian economy is sales of natural as to the EU.

NO WAY Russian will let the Qatar/Iran North-Dome/South-Pars gas-field (the biggest on Earth) gain pipeline access to the EU! NEVER!

If necessary, Putin will do nuclear surface blasts in order to maximise fallouts=> too much radioactivity to build anything, incl. a pipeline.

Or since he sold nuke plants to Turkey and Iran, these could have a major incident, worst than Chernobyl…

Remember what Putin said at the start of the Ru intervention in Syria? He declared “I hope we won’t have to nuke”… He also once said “Russia is not married with Assad”

So now you know why Russians are here and how far they’re ready to go!

Russian intervention, at its height, didn’t costed more than $3M/24h… Moreover, this was taken on drill and weapons tests costs. Russia tested 200+ new types of weapons in Syria.

And got free advertising from all media 😉 Russia regained her traditional place as #2 arms exporter over France which was #2 for a short time.

Now maybe China is #3, you can’t really know : they don’t publish their results 😉

I am only in for Elbit and Thyssenkrupp.

ABOUT US
Al-Masdar Al-'Arabi (The Arab Source / المصدر نيوز) is dedicated to providing the latest news and analysis from the Arab world.
Contact us: [email protected]
FOLLOW US
© Copyright 2014 - 2018 Al Masdar News | المصدر نيوز - All Rights Reserved | Cloud by Epic
wpDiscuz
60
0
Would love your thoughts, please comment.x
()
x
| Reply
You are going to send email to
Move Comment
Translate into
AfrikaansAlbanianArabicArmenianAzerbaijanBasqueBelarusianBosnianBulgarianCatalanChineseCroatianCzechDanishDutchEnglishEstonianFinishFrenchGalicianGeorgianGermanGreekHaitian(Creole)HungarianIcelandicIndonesianIrishItalianJapaneseKazakhKoreanKyrgyzLatinLatvianLithuanianMacedonianMalagasyMalayMalteseMongolianNorwegianPersianPolishPortugueseRomanianRussianSerbianSlovakianSlovenianSpanishSwahiliSwedishTagalogTajikTatarThaiTurkishUkrainianUzbekVietnameseWelshYiddish