Archbishop Bashar Warda said air strikes were “not enough” to defeat Islamic State militants and “begged” for Western troops to be deployed.

He said Iraq’s Christian population was declining and that he would speak to the UK government about further action.

The government has said efforts to defeat IS were “comprehensive”.

During a visit to London, Archbishop Warda, of the Catholic Chaldean Church, told the Westminster gathering Iraq’s Christian communities had fallen “dramatically” over the last decade – from 1.4 million during the rule of Saddam Hussein.

Tens of thousands of Iraqi Christians and Yazidis fled their homes in the summer of 2014 following warnings from IS militants to renounce their faith or face death.

“We don’t have much time left as Christians in this region,” the archbishop told a gathering of cross-party MPs and peers.

“As a Catholic I find it hard to say, but I want military action, there is no other way now.”

He is due to address the Church of England’s ruling General Synod on Tuesday.

His speech comes after the Prince of Wales spoke of his “deep concern” for the suffering of Christian churches in the Middle East. 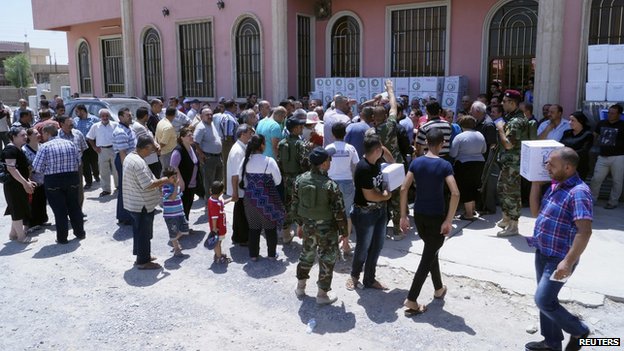 Aid is distributed to Iraqi Christians who fled to Hamdaniya, east of Mosul, last year

Archbishop Warda called for the deployment of British troops on the ground to drive IS – known as Daesh in Arabic speaking countries – from the Christian villages of the Nineveh Plain, adding: “I beg you to focus on the need for military action.

“What we are seeing is worse for the world than what happened in Afghanistan, with more and more young people going to fight with Daesh. Military action is needed – powerful force – to get them out of our villages.”

He said Iraqi bishops from across the Christian denominations were in “continuous talks” with each other and with Christian politicians in Baghdad.

He said they shared his view that the west should take military action – describing it as “an unfortunate solution”, but one which was needed.

Archbishop Warda said he was struggling to persuade Christian families not to leave the area.

Conservative Former Cabinet minister John Gummer, now Lord Deben, said the archbishop’s speech was an example of the “desperate dilemma the Christian community of Iraq are now in”.

“Having been subjected to war, they are now calling for it as a last resort,” he told the BBC. 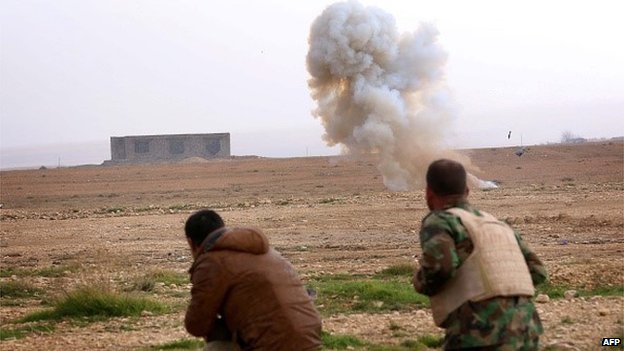 Baroness Berridge, the Conservative peer and chairwoman of the all-party group on international religious freedom, said she was “shocked” to hear a Catholic Archbishop say military action was the only option.

“How bad, how evil this situation must be if this is the call of a Catholic archbishop,” she added.

Mr Senaan, an Iraqi from the Nineveh Plain, said: “Who is going to free our villages and towns? We do not believe in the Iraqi army or the Peshmerga.

“Britain should go and free our cities. In 2003, you didn’t complete the job.”

However, Syrian Anglican, the Rev Nadim Nassar, told the meeting that “bullets will not solve the problem”.

It comes after a recent report by the Defence Select Committee said the UK’s role in fighting IS extremists was “strikingly modest” and should be stepped up.

The group of MPs said it was “surprised and deeply concerned” the UK was not doing more.

In response to the report, a government spokesman said the international coalition was taking a “comprehensive approach” against IS, through air strikes and by tackling its sources of money and foreign fighters.

The UK had carried out the second highest number of air strikes among coalition partners and helped to train Iraqi security forces and Peshmerga forces, the spokesman added.

AMN has set up an Mastodon node and invites you to join!
Click to join now!
Share this article:
Tags: ChristiansIraq