After the jihadist forces of the Jaish Al-Fateh coalition managed to capture the Artillery Base and the Arming College, the Syrian Army grouping allocated to the base was able to et up a strong defense line at the Technical College repelling the assailants.

As of now, huge masses of reinforcements have arrived on the scene to repel the attack from the 1st, 4th, 17th Armored Divisons, the elite Tiger Forces, Army Engineers from the Assad Military Academy, the Arab National Guard, local security forces, and numerous local volunteers. Reportedly, large reinforcements also arrived from Al Hader town in south Aleppo to help fend off the jihadist offensive.

Intense firefights are ongoing as helicopters haunt Aleppo’s skies. Air strikes and explosions can be heard from all corners of Syria’s largest city.

If the Syrian Army succeeds in repelling the rebel offensive, not only would the army ensure the security of the supply line that feeds the 1.5 million civilians of west Aleppo but also inflict a haunting defeat on the opposition forces which have suffered costly losses in terms of manpower and armored vehicles.

wipe them out. all of them.

Too late. The battle is lost.

you have three people on the puc. How is that massive? 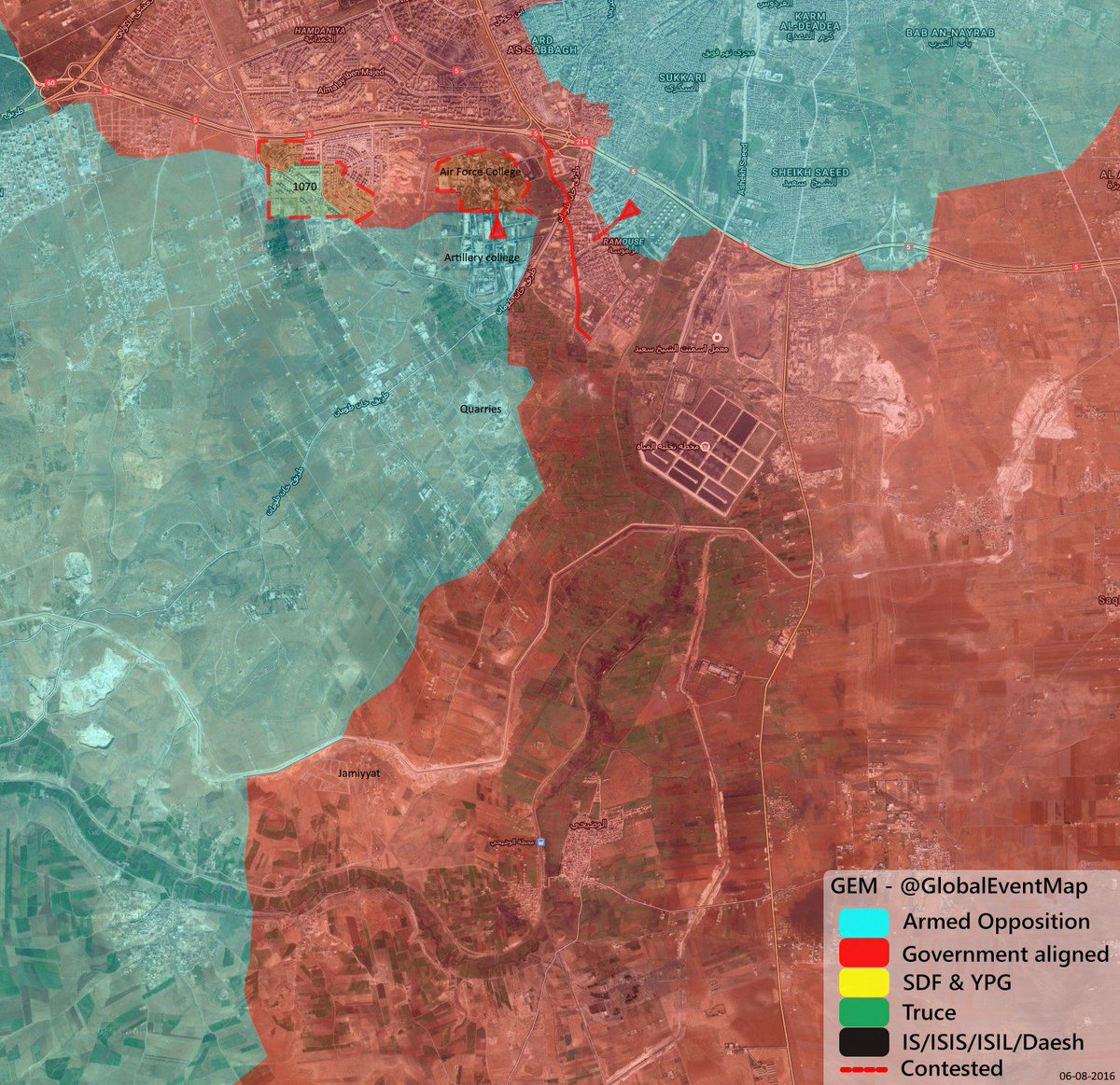 This is the kind of senario that I expected and I am sure that the SAA along with the Russian Areospace Group and the SyAA Force will inflict the maximun damage on the terrorists.
This is a fight of attrition and I expect that the terrorists fighting capacity and capabilities will be significantly reduced at the end of this battle.

If they manage to defeat these offensives, the astronomical (ok I’m exaggerating) cost of the terrorist losses will be for nothing. It would be a significant victory. They have already suffered hundreds, and several hundreds of dead (imagine how many wounded!).

Let´s hope the best! @AMN: would you be so kind to publish this comment at least?

We publish all comments that are not spam, but sometimes they get stuck in moderation so we have to manually approve them.

Even ones with bad language? I do hate to censor myself.

terrorist will flee in the moment that SAA star using masive UTR-77 desmine cordon..and during night termite airstrike!..its enough as the enemy inside that complex collapses for exhaustion!

Looking at the map, the Jihadists have over extended themselves, pushing for a narrow bridge to break the siege.

Likely, the SAA are going bring reinforcements in from the south and north, behind the offensive and create an encirclement. They’ll then be able to kill 2000+ terrorists at their leisure.

only 1 of these 3 reinforcments is massive. The other 2 aren’t, really.

It seems rebels have almost unlimited quantity of suicide fighters and Syrian Army is not able to deal with it. The shortage of snipers? This base was also poorly prepared. Hope Syrian Army can prevail over terrorists in Aleppo but the situation is quite tragic for now.

I already see a Title: “Breaking: Battle for Allepo makes an U-TURN where besiegers become besieged!”…

Prayers from the UK, go get em tigers, let them feel and fear the might of the Tigers

3 things which would prevent sunis fighting for jews and cia, to be on surface.

Those weapons offer little to zero tactical value in the conflict as it stands now. You should read up on the subject and the reasons why should become obvious.

this called massive reinforcements , dye from your anger pig!

About d**n time. Maybe if they’d arrived days ago, travelling just down the road essentially, this catastrophe wouldn’t have happened. Incompetence.

Manpower shortages of the SAA means if they have to send reinforcements they need to be pulled from elsewhere. Which means battle for handarat would have had to be stopped. Not acceptable as the whole point for handarat is that ifthis worst case senarion of west aleppo being cutoff, they will have anoyher rout opened around east aleppo via handarat. SAA doing best it can with the senarios presented. I trust and beleive they will prevain in this. The seige wont be broken and they will gain back in heir ground.

How do they have shortages though, ISIS has just 20,000 men in Syria AND Iraq, and yet they control half of Syria, and the SAA struggles immensely against them! The rebels probably have tens of thousands across Syria, 100k max, and yet the SAA, with Iraqi, Afghan, Iranian and Russian help, are struggling so much against numbers that they outmatch. It’s like Fallujah where it was reported as such a gargantuan effort to expel ISIS even though the Iraqis had 20,000+ men and ISIS had less than 1000, it’s all a joke that a half competent army would laugh at.… Read more »

Have you fought in urban warfare before? I have. IT IS NOTHING like you imagine it is. The SAA is highly outnumbered in this battle in Aleppo. This battle has the LARGEST number of terrorists attacking at once EVER recorded in Syria at nearly 13,000 attackers pouring in on on a rather small frontline. The SAA is outnumbered well over 10:1 if the SAA is “incompetent” the gov would be gone 5 years ago. How well is th US airforce doing against ISIS??? NOT WELL AT ALL. you have never seen human waves attacking before when they are high on… Read more »

Sadly, the internet has no shortage of armchair strategos, whose military knowledge has been gained from Hollyood and video games. They have no conception of the number and size of Syria’s combat effective units, after years of war, even wih the occasional Iranian or Lebanese platoon-size militia volunteering. To them, every battle is 10s of thousands vs 10s of thousands. Instead of the reality where 95% of the conflicts are squad to platoon size elements of militia engaging each other, with a strategic reserve of experienced military professionals waiting to speedily deploy to anything larger. ISIS and JaN are constantly… Read more »

Have you fought in urban warfare before? I have. IT IS NOTHING like you imagine it is. The SAA is highly outnumbered in this battle in Aleppo. This battle has the LARGEST number of terrorists attacking at once EVER recorded in Syria at nearly 13,000 attackers pouring in on on a rather small frontline. The SAA is outnumbered well over 10:1 if the SAA is “incompetent” the gov would be gone 5 years ago. How well is th US airforce doing against ISIS??? NOT WELL AT ALL. you have never seen human waves attacking before when they are high on… Read more »

I’ve fought countless battles in urban warfare, on Call of Duty AND Battlefield 3, among others, I can imagine what it’s like… If the SAA were incompetent, they would’ve lost over half the country like they’ve done in the last 5 years, there, fixed it for you. By the way, I’m a fan of the SAA, I want them to win, but we have to criticise their shortcomings and accept them, rather than act like the tide is about to turn when they’ve been beaten back to such a massive extent. The Castello offensive seemed gargantuan for them and then… Read more »

“Iraqis had 20,000+ men and ISIS had less than 1000” you neglected that they had US air power and on ground support from the US. Russia owns the skies and the killing ground in Syria. ISIS is being sucked into not only a boiler inside Allepo but the reinforcement being rushed (ISIS) to relieve the boiler concentrates to the only penetrable (false) weakness where Russian and Syrian air forces eradicate them in great numbers of men and equipment destroyed.

aljazeera is telling a lot of lies, that the government military base in aleppo is captured..where are the SAA currently.

The Russian Areospace Group and the Syrian Arab Air Force has now established operational fire control around the Academies and Artillery base, this means terrorists renforcements cannot enter into these areas nor combatants come out without being blasted to smitheerns.The terrorists in these areas are now isolated, they are tired and psychologically vulnerable.
Operational Offensive SAA units can now comb through these areas on search and kill missions taking back their positions.
As I see it, its like shooting fish in a barrel.

RAMOUSEH IS FULLY UNDER SAA CONTROL. THE SUPPLY LINE IS NOT CUT. multiple broadcasting news channels were and are still reporting live from the Ramouseh roundabout which is clearly and fully under allies control. SAA officially RETOOK most of the artillery base and is currently advancing. The attacks from East Aleppo have nearly stopped as the airforces were bombarding the east frontline relentlessly.

Do those Afghan /Iran/ IRAQ / Lebanon mercenaries have no another place where to die but Aleppo ?

Most of the Jihadi vermin are now supposedly Uighurs, but there will still be a few remaining Chechens and Moroccans among them. It’s nice that the psychopathic European Muslim youth s are all getting eliminated in Syria. Nobody’s gonna miss ’em.

About 100 organized civilians jumping up and down somewhere, what is this supposed to prove ? That they can still organize their tame sandies to jump up and down on command. Obviously, even Arabs can do it.

The war is seem to be lost. This, with reinforcement is simptomatic for SAA. Reinforcement for what ? From NW to SW and after that ? To SW to NW to the same things…For defense. An army is defeated when is incapable to have offensive initiative. The russians is not in Syria to win this war but to avoid a definitive colapse of SAA. Only who must to win but are incapable is SAA…Stop the war and capitulated now.

Send them one of these

There’s either Sunday peace today (all gone home till tomorrow) or we have a total news blackout since Saturday night.