Home Syria Kurdish force on the verge of capturing Al-Hasakah

Al-Hasakah, Syria (4:00 P.M.) – The Kurdish police (Asayish) and People’s Protection Units (YPG) reportedly seized the eastern neighborhoods of the Al-Nashwa District on Monday, forcing the government-backed “National Defense Forces” (NDF) to withdraw to the nearby Liliyah District in the south.

In addition to their success at the Al-Nashwa District, the Kurdish force managed to make a number of gains inside the Al-Hasakah Sports City; this area was once a stronghold for the National Defense Forces.

With their control over the western districts and much of the south, the Kurdish forces are on the verge of seizing the entire provincial capital from the NDF, putting an end to the government’s presence in the provincial capital.

The Syrian Arab Army (SAA) and Syrian Air Force are still providing artillery and air support to the National Defense Forces, but their attacks are far less frequent.

So the U.S. plan to at least partition Syria is moving forward…to allow the Kurds to have one of the 3 parts.

filthy Kurds doing the US bidding 🙁

Filthy Yourself. You might frekvent some hospital learning shame – if You ever can. Kurds has treated those enklaves very nice compared to ISIS rule.

you , european nazi, want Syria destroyed. Dirty scum, you did not have enough after the WWII? Need russians soldiers in Berlin again?

Kurds are making land grabs from a country that’s at war with terrorist legions. It’s despicable. In Turkey they’re committing terrorist attacks. In Iran they’re attempting to seize territory. At the moment I can’t see any difference in the actions of Kurds to those of Islamic State.

At least four or five parts – Kurds, ISIS, Idlib, Alaouites, Damascus, Druze. However, I’ll believe it when I see it. The US failed in that in Iraq.

Well, I would rather say it could look like US allow or decide, that Kurds could have their more or less own part. If so, they havent done that before exept for the non fly zone in Iraq. US also need YPK very much as infantery defeating ISIS and defending the area or attacking Raqqa and capturing ISIS forces trying to keep alive after Mosul. Thats the plan isnt it. A small group of them were here last week. Im guessing too. Dont understand YPK after Manbij. Only the security line against Jarablus. Might be some agreement with the russians… Read more »

It’s the kurd plan for a good century now, James, and not only in Syria…
PKK/PYD is Boochkinist. In other terms, they’re nearer of anarchist-democracy than from communism… Very leftists don’t need the US to have an agenda, but the US are very practical : they have more military aircrafts than Russia+China+NATO w.o them 🙂
Ethnicities in… 1910!!!! 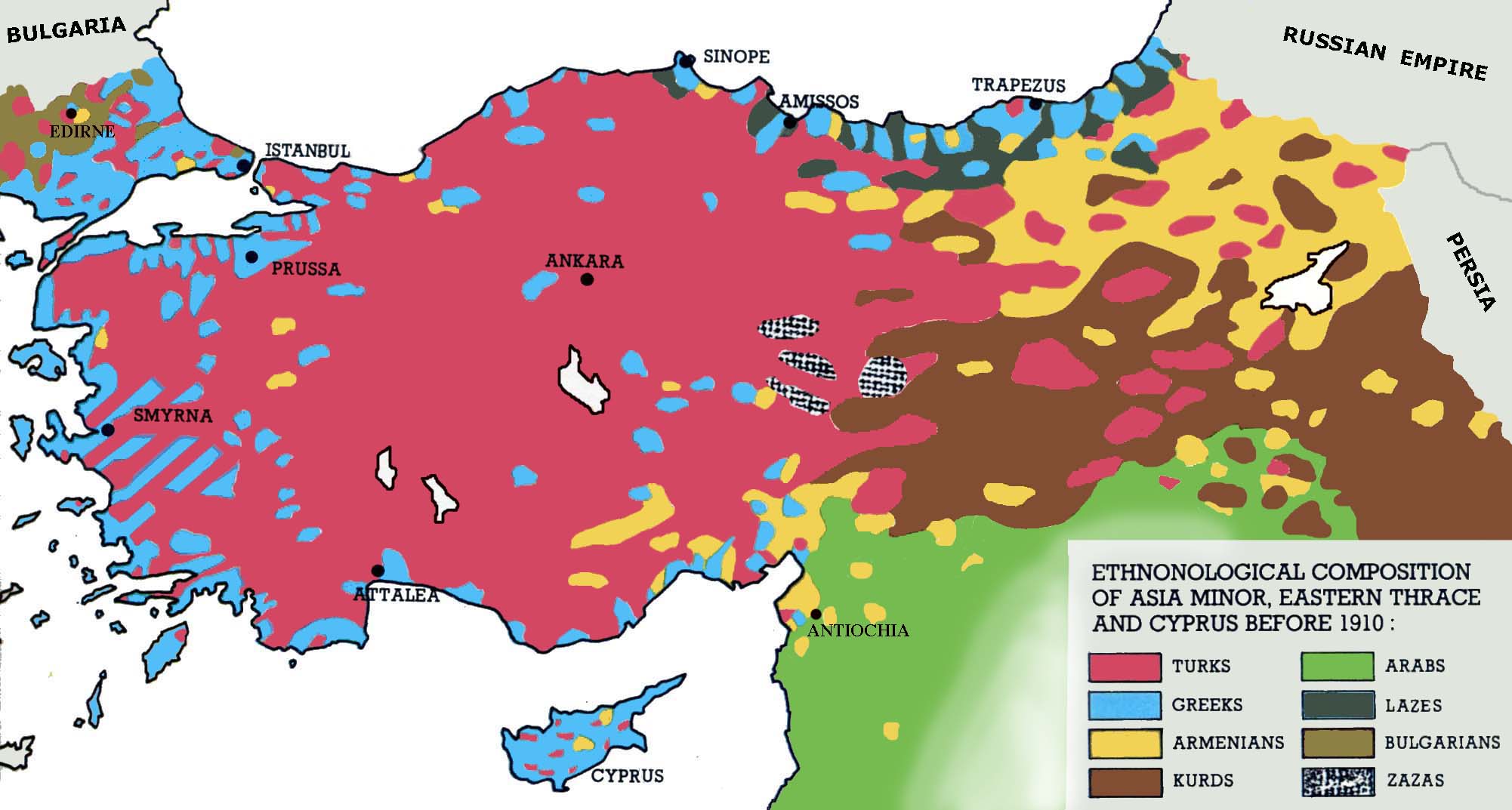 Funny, note there are not many Kurds in Syria according to this map. What does that tell you?

If the Turks allow it.

Kurds are massive backstabbers and traitors. It went from ‘this colonel is the reason of our tensions ‘ to ‘get out of hasakah or you are all dead’ leaflets being spread. What do i expect from a Zio puppet group? I dont like turkey but his war against kurds is not without reason!!!

And the SAA is embarassing, air and artillery support and way more tanks and cant keep a city from a police force and a small YPG force which is relatively way less equipped and has no air force.

Kurds have been oppressed for centuries by arabs, ottomans and persians, they were here before anyone, if you’re true to your people, you’re not a traitor… And you make everybody laugh with your “Zio” : jews have exactly the same rights over the land of Israel, BTW, even heads of the PLO have told journalists that the concept of palestinian people was a total scam and forgery as there’s NO Palestinian people, this is a PR operation to drag all the jews out of the arab world. The 1st boss of PLO had deals with Himmler to build death camps… Read more »

away with the kurdish bastards, they are the same bitches of CIA, like ISIS is.

Kill all them f*****g baskctabbing kurds. They want to ethnic cleanse Hasaka. This may be Christian Arab and Assyrian genocide. They should try to create their country in Turkey. Not in Syria.

Mkurdish country are in turkey, syria, Iraq and Iran lands and no deliberation other than to create great & glorious free kurdistan because
its means durability reconciliation & peace in ruined region of Middle East

what is wrong with these stupid arabs? now they have been bought by US through Turkey and here they are now doing the same thing ISIS and the Nusra was doing

Yhe Kurds started it all. Majority of Hassaka city and Hassakah governate are Arabs. The Kurds are just being greedy. And Assad can’t afford to send actual troops to Hassakah or even bomb it properly being squarely focused right now on Aleppo, Damascus suburbs, and Homs.

Majority Arabs? Yeah, it shows in battle; not! This could have been seen before it even started; and the worst part is, everyone now knows that Damascus is powerless to defend any part of Hasaka, including Qamishli.

It’s a fact that Hasakah is mixed dumbass

Kurds AREN’T ARABS! They were here long before the Arabs, as were the Jews, Assyrians, Yazidis or Armenians…

That doesn’t change the fact that that is Arab land. Plus the Kurds aren’t the most ancient people. Assyrians are more ancient. Again, you are showing your disdain for the local Christians. f*****g Hypocrite

w*f do you think “Arabs” are, that they came from space ?

@leithfadel NDF INVOLVED TO SYAF, TO PUT IS IN A BATTLE LOST BEFORE START. START A FIGHT FOR LOSING IT, IS FOR FOOLS

American and Russian can’t stay for ever in our region.

Air support can also be Russian cargo planes dropping supplies like anti tank missiles rockets and ammo as well as Syrian paratroopers. The soldiers can hold positions and endure better in that case.

This is a quagmire for the Russians, first they support the aspirations of the Kurds and they are in favour of strengthening Assad’s hold on power. How are they going to reconcile both? No Kurd, a Caucasian people will seek to return to subservience under the Arab, a Hamitic/semitic people’s yoke. Not with what they have been through, that possibility does not exist any more.

Wonder how turkey is accepting the kurds after the failed coup attempt.

Since this territory grab, lost all empathy for the Kurds.

Now Turkey, Iran, and Syria are likely to be of one mind when it comes to the Kurdish problem, and the Kurds have brought it on themselves.

Messy, but had to happen; the SAA/NDF whatever have no place being there, they’re completely surrounded, it’s pointless. The northern strip belongs to the Kurds now, pull out and use those troops elsewhere.

You must be very anti-Semitic/anti-Christian

What about the arab and christian assiryan population? They just should be removed from their homes? They should just sit and wait being ethnic cleansed? Why should they acceptt beeing ruled by kurdish/CIA/Israeli authorities?

They’ll only be ethnically cleansed in your mind, not reality. The keys to Manbij were just handed back to Arabs, all claims that ethnic cleansing by Kurds have been disproven, you’re either nuts or completely, woefully misinformed.