Jerusalem (AFP) – Israeli Prime Minister Benjamin Netanyahu has criticised the UN force in Lebanon just days after a Spanish peacekeeper was killed by what Madrid said was Israeli fire.

In a telephone call with UN chief Ban Ki-moon late on Sunday, Netanyahu charged that the UN force was failing to report on what Israel alleges is large-scale movement of weapons into south Lebanon by the Shiite militant group Hezbollah.

He also complained that a UN Security Council resolution, which created and expanded the number and mission of the UN force after Israel’s bloody 2006 war with Hezbollah, had not been implemented.

“The prime minister noted that UN Security Council Resolution 1701 has not been implemented and added that UNIFIL soldiers are not reporting on the smuggling of weapons into southern Lebanon,” his office said.

The resolution called for the Lebanese army and the UN Interim Force in Lebanon to deploy across the south right down to the Israeli border and for all other military forces, including explicitly Israel’s, to withdraw.

A Hezbollah missile attack on an Israeli army convoy on the frontier on Wednesday killed two Israeli soldiers and wounded seven, prompting Israel to respond with artillery fire and air strikes on southern Lebanon. 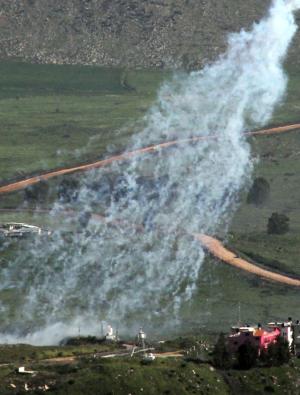 A Spanish member of UNIFIL was killed during the exchange.

“The prime minister expressed his regret over the death of Spanish UNIFIL soldier Francisco Javier Toledo,” Sunday’s statement said, adding that there would be a joint Spanish-Israeli investigation.

Netanyahu pressed Ban to blame Iran for the attack, the statement said, as Israel is urging world powers not to sign a nuclear deal with Tehran.

The Hezbollah attack was an apparent response to an Israeli air raid that killed six of its fighters and an Iranian general in Syria last month.

Israel occupied parts of Lebanon for 22 years until 2000 and the two countries are still technically at war.

The Jewish state fought a bloody war with Hezbollah in 2006 which killed more than 1,200 people in Lebanon, mostly civilians, and some 160 Israelis, most of them soldiers.

AMN has set up an Mastodon node and invites you to join!
Click to join now!
Share this article:
Tags: HezbollahIsraelLebanonSyria
ShareTweetShare