Home Syria With ISIL, Al-Qaeda on its border, Israel chooses to attack the Syrian...

BEIRUT, LEBANON (1:45 P.M.) – The Israeli Air Force carried out its second attack against the Syrian government forces this month, yesterday, striking a group of Golan Regiment fighters that were positioned in the Golan Heights.

Why the Israeli military chooses to target the only force in southern Syria that is fighting both Al-Qaeda and the Islamic State (ISIL) is often debated by all parties in this six year long conflict.

However, to the Syrian government, Israel’s actions are clear; they are providing air support to the groups fighting the Syrian Arab Army (SAA) and their allies, such as Hezbollah and Harakat Nujaba (Iraqi paramilitary).

Israeli officials have often spoken about the greater threat Hezbollah poses to their country than terrorist groups like the Islamic State and Hay’at Tahrir Al-Sham (Syrian Al-Qaeda affiliate); this is meant to justify their monthly attacks on the Syrian government forces in western Syria.

Israel’s actions have even led Syrian President Bashar Al-Assad to label the Israeli Air Force as “Al-Qaeda’s Air Force,” something the Knesset has yet to contest.

This latest attack by Israel once again begs the question “why is it necessary to target the Syrian military as they prepare to attack Al-Qaeda?”

Perhaps, the thought of the Syrian government stabilizing the Golan Heights is not aligned with the Israeli regime’s contingency to prolong this war and keep Hezbollah busy in another theater of battle…

As the Syrian Arab Army moves forward with their Golan Heights offensive in the coming weeks, they are expecting more attacks from the Israeli military; especially, as they push closer to the occupied areas.

Israel has never been a country of peace…hopefully it will self-destruct because that’s aĺl they deserve.

Who said it’s a “country of peace” anyway? 😀
It’s an illegal entity, founded by terrorists, populated by foreigners who came to plunder and murder the local population.
Strikingly the same as ISIS, as far as the origins are concerned.

Easy : Israel is in love with AQ and ISIS. Because they provide a lot of false flags I can use ❗

A bunch of cowards. disgusting people!

“Never bite the hand that feeds you” That’s why IS has never threatened or targeted jewish or israeli targets!

Why would they attack their joo masters?

There’s nothing Israel loves to see more than radicalism and sectarian violence among its neighbours. They divide and weaken the Arabs and foster western support.
(By the way, I’m not one of those who believe Israel founded ISIS. I just know that they thank God on their knees for ISIS every day.)

As Elijah Magnier said in his considerations Russia cannot anymore remaining ‘shy’, or the things will worsten, and all this sacrifice will be worthless, in the exact moment the SAA is winning thanks to russian air force.

With allied Washington’s “Arab legion” on its border, Israel chooses to attack the Syrian army:

“Who supports ISIS and how” 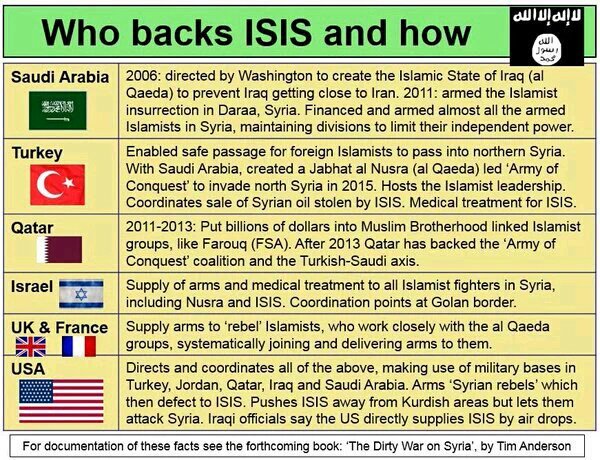 Leith, all that the intelligence community which is following the developments on the net, is wondering ONLY ONE THING: WHERE ARE THE S 300 RUSSIANS? Why the israeli scums can attack the syrian army, and Russia remains silent? Why Assad, Iran, Nasrallah, are not enraged?

The remaining of that plane has never been found, no photos to see online, so don’t try to sell me something I don’t consider neither for a moment, since I want VISIBILE PROOFS as all the people who are really following this war.

Ah, and we are in WWIII since 2001 with Iraq’s attack, and in 2008 with the financial crisis the bases for the attack to Gaddafi and to Assad were posed, in case you haven’t noticed.

“WHERE ARE THE S 300 RUSSIANS?” => In Tartous while S-400 are in Hmeimim. “Why the israeli scums can attack the syrian army, and Russia remains silent?” => Because some idiots in several artillery regiment can’t restrain themselves at shooting shells into Israel so Israel simply strikes back. And they’re no more scum than all their neighbours, actually, western Syria and Lebanon are mostly populated by ethnic Jews who had their ancestors force converted into Islam, this was proved by DNA tests. “and Russia remains silent?” => Because they know that it’s those who shelled into Israel that provoked these… Read more »

Why did Syria, Iran or Hezbollah responde? Because they know that the Zionist regime is a crazy entity and that any rush response would lead to a bigger war + they want to defeat the terrorists in Syria and Iraq first. “In other terms, although it’s not publicly stated, the Shia crescent (Lebanon, Syria, Iraq, Iran and Yemen) have the same enemies Israel has.” And those enemies are: Turkey (whit which the Zionists have a strong relation), the Monarchies expecialy SA (which will let Israhell use its airspace to attack Iran) or Al-CIAeda (which attacks everyone except the Zionists). “(while… Read more »

It is so f*****g CLEAR that Russia, Iran, Hezbollah,Syria, cannot wait anymore, if they want to be SAFE for the future, that even the russian media begin to speak openly with no more diplomatic courtesy: http://russia-insider.com/en/israel-makes-it-official-destroying-syria-will-legitimize-land-grabs/ri19676 “Israel Makes It Official: The Destruction of Syria Will Legitimize Israeli Land Grabs” So, I am waiting for the moment that those f*****g S 300 will be used on those Israeli mongrels when they will try again to attack SAA or Hezbollah, or the NEW RUSSIAN TROOPS JUST SEND TO DARAA TO STOP THE ATTEMPT OF THOSE RATS TO CREATE A BUFFER ZONE FOR… Read more »

I don’t give a f**k to the reply of a dirty jew rat, since you are a bunch of mongrels, while lebaneses are phoenicians, palestinians are philistines, and Syria is made up by assyrians, kurds, yazidis, so Indoeuropean Aryans, and a part of phoenicians. Iran is totally Aryan. I asked to Leith- who is phoenician, and not a mongrel- a geopolitical question: the fake rants of a jew mudblood like you don’t interest me.

I am not interest in your rants, jew hasbara scum. They are different from you, and that’s all. I wasn’t speak to you. Period.

Could the Israeli preference to attack Hezbollah, Iraqi PMU and militia somehow be related to their stated aim to destroy Israel?

Could “their stated aim to destroy Israhell” be related to the genocide nature of the Zionist regime.

ABOUT US
Al-Masdar Al-'Arabi (The Arab Source / المصدر نيوز) is dedicated to providing the latest news and analysis from the Arab world.
Contact us: [email protected]
FOLLOW US
© Copyright 2014 - 2018 Al Masdar News | المصدر نيوز - All Rights Reserved | Cloud by Epic
wpDiscuz
20
0
Would love your thoughts, please comment.x
()
x
| Reply
You are going to send email to
Move Comment
Translate into
AfrikaansAlbanianArabicArmenianAzerbaijanBasqueBelarusianBosnianBulgarianCatalanChineseCroatianCzechDanishDutchEnglishEstonianFinishFrenchGalicianGeorgianGermanGreekHaitian(Creole)HungarianIcelandicIndonesianIrishItalianJapaneseKazakhKoreanKyrgyzLatinLatvianLithuanianMacedonianMalagasyMalayMalteseMongolianNorwegianPersianPolishPortugueseRomanianRussianSerbianSlovakianSlovenianSpanishSwahiliSwedishTagalogTajikTatarThaiTurkishUkrainianUzbekVietnameseWelshYiddish