With the capture of Halwanji, the Free Syrian Army and its Islamist allies have reached the Sajur river from the western portions of its offensive.

Meanwhile, to the west of Jarablus, the Free Syrian Army and its Islamist allies have claimed to have destroyed their first ISIS suicide vehicle in al-Dhaheriyah. It was destroyed before it could reach its target.

They didn’t captured from YPG but from SDF. YPG is now threatening to come back in the area if they don’t stop attacking SDF.
Seems that coalition is NOT HAPPY AT ALL as they were supposed to go after Da’ish held villages/town and not SDF held areas.
What are you waiting for with Noor Na’al dine Omouk al-Zenki mofos in the area?
Now, LOOK what Turkey is doing! This is not Syria!
https://www.youtube.com/watch?v=BAteWaVJi9g
Ethnic cleansing IN TURKEY!

And these are not these strange so-called rebel held areas in Syria with only males and the carcasses of children they slaughtered themselves : you see real families and real people in the ruins…

See the EAL FACE OF ENVERDOGAN PASHA. Enver Pasha is alive and kicking, he just changed his name, genocide can go on!

Kurdish official tells al-Mayadeen: Kurdish forces refused request by US to go towards Raqqa.
A spokesperson from SDF said last week that US told’em that if they had contacts with the russians, US will stop providing help… Guess what will happen for sure if US don’t refrain Enverdogan Pasha’s proxies?
Names of civilianns killed by turkish airstrikes :

Protests against turkish invasion in Kobane : 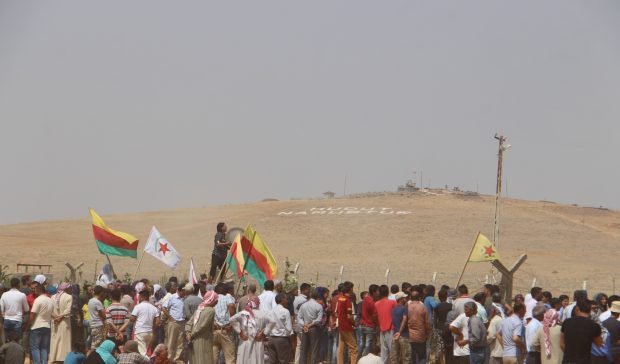