BEIRUT, LEBANON (00:11 A.M.) – The rebel group Failaq Al-Rahman of the Free Syrian Army (FSA) accused the Syrian Arab Army (SAA) of carrying out an attack with chlorine gas in Ayn Tarma, Damascus on Friday. They voiced their claim only four days after the US White House released a statement, warning that a chemical attack was imminent and vowing to make the Syrian government “pay a heavy price” if another such incident was to take place.

The last time allegations of a chemical attack by the SAA were voiced mainly via various social media accounts of the Syrian opposition, the U.S. President Donald Trump took them as a reason, to bomb the Shayrat airbase used by the Syrian Airforce and Russian troops alike with 59 Tomahawk missiles.

The allegations seem questionable since the U.N. announced in June 2014 that the Syrian government had voluntarily destroyed all chemical weapons and in their possession and all means for their production within the framework of an agreement with the U.N..

While the Syrian conflict in 2017 has already seen multiple bombings carried out by US forces against the SAA and its allies, especially in Syria’s south-east around the Al-Tanf border crossing held by FSA forces supported by embedded US troops, any such allegations are alarming. The US are infamous for using allegations of attacks labeled inhumane and possession of chemical weapons as a pretense to invade nations, as they did for example already twice with neighbouring Iraq.

That’s why Mossad and US militaries provide quality intelligence to help SAA fighting AQ/IS.
At US level, it just goes as high as the JCS (Joint Chiefs of Staff). They don’t pass intel directly but through Germany, Israel and Russia.
Note that, and I pointed this many times the rift between US DOD and the Obama admin!
https://en.wikipedia.org/wiki/Seymour_Hersh#Syrian_Civil_War
While the Jerusalem Post pointed that brasses in Israel were in the same mindset and one of the very last interviews of Meir Dagan before he passed away pounded in the same direction.

„We got a fuckin‘ problem“
https://www.welt.de/politik/ausland/article165905618/We-got-a-fuckin-problem.html

Well I never. I suppose President Trump will be taking a call as we speak about Beautiful Babies etc.

Will this False Flag attempt be used by the US ,France etc to attack Syria again ? The stakes are higher this time and much of the world does not believe the US bullshit anymore, even in Europe.

France attacked Syrian state? When? Moreover, some important points in what Macron said were -voluntarily?- omitted by several MSM but also alt-medias, as he told that France would go after WHOEVER is PROVED having used CW in order to blow their stockpiles, once these are located. Now, you seem to forget that chlorine is an incapacitating gas, NOT a lethal one and we’re well placed to know it as we were the 1st to use chlorine for warfare purposes, more than a century ago… “and much of the world does not believe the US bullshit anymore, even in Europe.” =>… Read more »

And frankly, chlorine being non lethal except in very exceptional conditions, with any idiot being able to cook some with household chemicals.
Since relations have soured between this Qatari proxy and Saudi-backed Jaysh-al-Islam, they’re more likely to have received chlorine from their former allies than by SAA which, BTW, didn’t even stockpiled chlorine.
Well, maybe should we use this excuse to bomb JaI a little?

This is just a warning. It means “if things will not go our way on the battle field we will call our US masters to bomb you by staging another gas attack.”

I’m still at a loss why the SAA is not utilizing its para-troopers in such circumstances. With the Syrian airforce having air dominance in the area, paratroopers could be parashuted behind and round enemy lines to seek and confiscate such chemical weapons stockpiles in the terrorists’ hands and at the same time make the defeat of the terrorists much faster.

Seymour Hersh points the finger on Turkey, KSA, Qatar and USA on a 2012 MoU to create a false flag with Sarin in Syria : 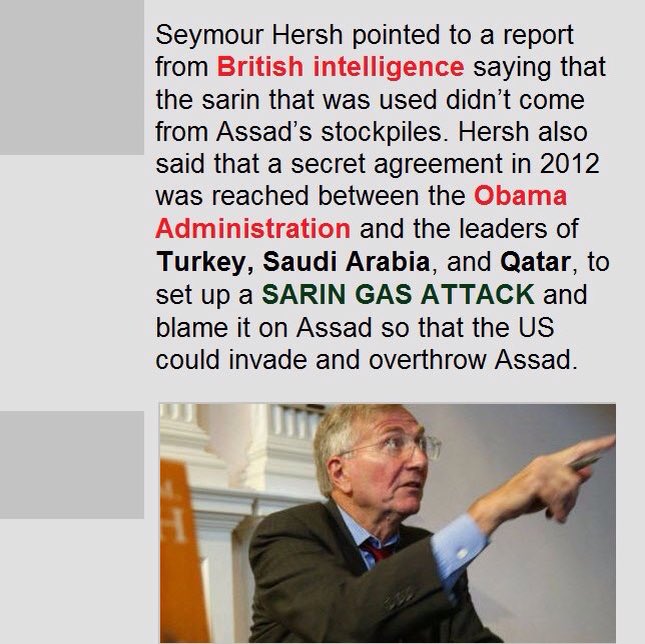