Home Lebanon ‘Every Israeli force that enters Lebanon will be destroyed’: Nasrallah

“Commander Badreddine was a faithful and smart fighter who was strongly concerned about the Israeli occupation of his country and Palestine,” Nasrallah said, highlighting his “enthusiasm and persistence to defend his country, Palestine, and other rightful causes.”

Nasrallah’s words came in a speech he delivered during a ceremony held by Hezbollah in Beirut’s southern suburbs marking the third commemoration of Badriddine’s death.

Badriddine, known as “Sayyed Zulfiqar”, was a senior Hezbollah military commander. He was killed near Damascus International Airport after a rebel group struck the area he was deployed to.

“The Ansariya ambush was one of the major military achievements of Sayyed Badreddine,” according to Nasrallah.

Touching on the domestic scene, Nasrallah said that Lebanon and Hezbollah were being subjected to an intimidation campaign vis-a-vis Lebanon’s maritime and land borders, as well as regarding Sheba’a Farms and Lebanon’s power represented by the army-resistance-people equation.

“The U.S. is seeking Lebanese concessions on the land and sea border issue, as well as on Sheba’a Farms — all for the benefit of the Israeli enemy,” Nasrallah said, warning the Lebanese not to allow anyone to undermine them “because Lebanon is strong in its army, its people, and its resistance (…) and this force is real and serious.”

“I would like to reassure you, on the behalf of your brothers in the Islamic Resistance, that every Israeli force that considers entering south Lebanon will be sabotaged and destroyed in front of the eyes of mainstream media and international television screens,” Nasrallah added; however,  he doubted Israel’s readiness to launch a war on Lebanon.

“All in ‘Israel’ know that any war on Lebanon needs to be decisive and swift,” he explained.

Shifting to the Syrian scene, Nasrallah said that his party was more convinced today than ever that Hezbollah’s decision to go into Syria was rightful.

“What happened in Syria was a U.S.-Israeli-Saudi conspiracy; it was not change into democracy. (…) How could ISIL control 40 percent of Syria and half Iraq without funding, military and media support by several states in the region?” Nasrallah said.

“ISIL is made by the U.S. in a bid to stand against all those who confront the U.S.-Israeli scheme in the region, and that’s what U.S. officials themselves have said,” he continued.

In the same vein, Nasrallah said that ISIL was over as a ‘caliphate’ and a state “but it still poses a threat.”

Turning to U.S. President, Donald Trump, Nasrallah added, “So far he [Trump] had kept all his election campaign promises regarding the so-called ‘deal of century’ and has been simultaneously milking Saudi Arabia. (…) I feel pity for the Saudi King after Trump’s humiliation of him in his latest remarks.”

Zionists only understand the logic of force and know that unlike unarmed Palestinian women and children that they kill daily, Hezbollah can hit back and cause mega pain. The Zionists have not taken on Hezbollah since the drubbing of 2006 is because Zionist hovels in Occupied Palestine will be laid to waste if Lebanon is attacked.

Unarmed women and children murdered? Here are some : 3 month old baby-girl Haddass stabbed to death : with her 4 and 11y old brothers, 35y old mother and 36y old father Here’s the 4y old brother : They were the Fogel family The murderers : Amjad Mahmad Awad (18) and Hakim Mazen Awad (17) According to a poll in Judea-Samaria, 59% of Fakestinians praise the massacre except for the murder of bay Hadass which “only” 32% praised 13 year old girl Hallel Yaffa Ariel stabbed to death while sleeping in her bedroom : Assailant Muhammad Nasser Tarayrah, 17, from… Read more »

I forgot : the 3 month old baby Hadas was beheaded too…
http://49yzp92imhtx8radn224z7y1-wpengine.netdna-ssl.com/wp-content/uploads/2015/08/Hadas-Fogel.jpg
About 100 Children assassinated video memorial
https://www.youtube.com/watch?v=dH1qKC-soEQ
There is a great difference about DELIBERATELY killing children and kids unfortunately ending as collateral damages since your beloved terrorists use them as human-shields. In such cases, your beloved terrorists are the murderers since they do a war crime by dragging civilians into a combat zone.

Douche-bag, your beloved ziomafia colony in OCCUPIED PALESTINE is in its LAST STAGE OF EXISTENCE.

p.s. Welfare recipients are mostly Orthodox Jews and Muslims. He is a French atheist who does not qualify.

@Ilya Ilyayev, Hezbollah can hit back and cause mega pain. So can Israel.
ISRAEL’S NUCLEAR WEAPONS:
https://fas.org/nuke/guide/israel/nuke/farr.htm

Nasrallah is a wise and respected leader of the most formidable resistance group in the world and his words are always gold.

Fool’s gold, actually.
BTW he threatened to shoot rockets on Haifa ammonia chemical plant…
Well, his words are just threatening to perform war crimes.
If Netanyahu does the same, he can say Israel will nuke Beirut, or more funny, send some weaponised Ebola, Marburg, Hanta and the old trusted Black-Plague.
Hezbollocks are not resistance, they are shitlamist terrorists just like al-Qaeda, living as parasites on Iranian tax-payers.

Their bunkers are dug, now time for you to dig your grave

I think The israelies kicked first the Arabs from their houses in first..

Nope! The Naqba was ordered by the Arab-League! Even Mahmoud Abbas confirmed this in a 1973 speech, You can see it everywhere in 1948 press! Arab league ORDERED all Arabs to leave their homes in Israel and that every not doing so would be seen as a traitor and exterminated with the Jews! Azzam Pasha, the A.L. SPOX clearly and publicy said what the 1948 war was about : “a war of extermination, a momentous massacre that would be remembered like the Crusades or the Mongolian invasions”. At the contrary, Israelis told Arabs : “stay with us : here you… Read more »

@Isiid Agsga, it does not matter who started. Both sides did crimes in and after the Palestine civil war. And the Muslim countries did the same ethnic cleansing and property confiscation to the Arab Jews, Mizrahim, after the Arab league had lost this first Arab Juwish war. This crime against humanity stabilized the numerical balance – most Israeli now are Mizrahim.

Facts can be summed up to a mutual property and population exchange. The losers on both sides became refugees at best.

A Muslim and Arabian Israel will not come in a foreseeable time.
ISRAEL’S NUCLEAR WEAPONS:
https://fas.org/nuke/guide/israel/nuke/farr.htm

Goys have nukes too numbnuts!

+++ “to commemorate the death of the late Hezbollah commander, Mustafa Badreddine” => Hypocrite! You assassinated him under Qassem Soleimani’s order! Badreddine was opposing the use of ISIS as a tool for Soleimani’s plan to Lebanonise Syria. Nevertheless, Badreddine was a freaking terrorist and mass murderer who deliberately bombed civilians and Blue-Helmet peace keepers! 301 Blue Helmets were martyred in 10 minutes, using two SVBIEDs in Beirut, 1983 attacks! Badreddine and Imad Mugniyeh were the Mick Jagger+Keith Richards of terrorism, lust like Ossama was the Michael Jackson and, you, Mr. Nasrallah, are the Phil Spector of terrorism… +++ ““because Lebanon… Read more »

Even by hasbara disinformation standards you post total trash. Not doing a good job indeed as evident by the number of down votes, people take you for RUBBISH.

I don’t know about Haspara disinformation. My two cousins were Blue-Helmets in Lebanon, 1983, hopefully, they were in patrol when Hezbollah blasted our BH’s HQ with a SVBIED loaded with a 2.5t fuel-air bomb. The attack was organised by Badreddine and Mugniyeh… So I know VERY WELL about these motherfückers! 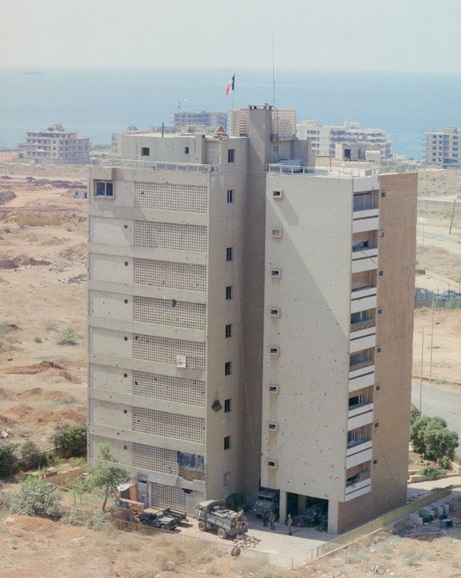 DEATH TO HEZBOLLAH!
It’s a pity our lame government only sunk 58 Iranian oil-tankers and navy-vessels as retaliation. We should have given a few tactical nukes to Saddam to make a point.

I don’t care about down votes. I just regret not being a Jew : I’d have made the alyah just to kill Hezbollocks and alikes, moreover, my knowledges would greatly help at optimising Tsahal’s punch, and they’re already very efficient, but this could be improved. They could easily multiply IDF kill ratio by 15 🙂

We all know that You are a paid Zio Social Poster. Don’t waste your time here.

ROFL! I don’t need to be paid. I’ve killed many cockroaches like Nasrallah when I was in Afgha, I even used gun lubricant with 13% pig fat paid with my own money to be sure they would go straight to hëll. We managed to have the yankees deliver us a full C-17 stuffed with pigs, then we fed the pigs with mujahideen carcasses. We ended sent back home due to this : this practise was VERY efficient, but totally infuriated Karzai. I’d have no problem at cutting Nasrallah into pieces with a machete, Rwanda style… Zionists are püssies compared to… Read more »

I can’t wait paying a visit to Damascus : I consider digging a little and capture the Salahudine’s skull then making it my ashtray 😉

A lot of dead US pigs in your photos. Thanks for posting you moron 🙂