US F-35 crashes during attempted refuel

BEIRUT, LEBANON (4:35 A.M.) – The Syrian Arab Army’s 800th Regiment of the Republican Guard’s paratrooper division was deployed to the western countryside of Palmyra on Thursday morning after another powerful attack by the so-called “Islamic State of Iraq and Al-Sham” (ISIS) threatened the strategic T-4 Military Airport.

The 800th Regiment, which is rarely used by the Syrian Army’s High Command, parachuted into the western outskirts of the T-4 Military Airport on Thursday after the Palmyra-Homs Road was closed by the government due to the security threat posed by ISIS.

Alongside the forces already stationed at the military installation, the 800th Regiment drove back the attacking Islamic State terrorists, killing more than 70 (latest estimate) of their combatants before securing the entire area.

The 800th Regiment would later carry out the counter-attack that allowed the Syrian Armed Forces to clear the outskirts of the T-4 Airport on Thursday night.

I can not imagine the disappointment and anger of their sponsors against ISIS to see them stalled in taking the T-4 Airport in time to continue successfully their lightning and surprising offensive after their fast reconquest of Palmyra.
And on the other hand, I can not imagine either the worry of them fearing to be swept by the Syrian forces and their ally outside of Palmira in a strong counteroffensive anytime, being at greater disadvantage by failing to capture that strategic airport.
Poor devils

If the Kurdish attack on Raqqa was really paused to give IS a chance to regroup for attacks at resources of Palmyra and Deir ez-Zor You are right. Anyway the Kurds will be pleased to hear of heavy IS casualties. The dead will not come back to fight in Raqqa that is only an hours ride away.

Hey, SAA is reading me or what? Said yesterday that in such case we’d use paratroopers, now it’s first time I remember them using such action!

Daeshbag, your wife must find you infuriating as you are ‘always right’ 🙂

Had Encyclopedia Universalis before I met her. Sold it since : Wife knows everything. Daughter will beat us both. Measured 154 IQ @8y old on adult test…

it’s about time they got some airborne action goin’ on. now, they need to do a heliborne assault!
however, palmyra really has no strategic value, right now! southwestern Aleppo is the next key to victory!
On to Abu a Dahur!!!

Although Palmyra itself lacks strategic value, sometimes the symbolic mediatic and political value far exceed to surpass the strategic in the short or long term by its transcendence, repercussions, psychological and moral effect on people. Just remember the value and the noise in all the great media reports of the world that caused the first conquest of Palmyra named a World Heritage Site by UNESCO a few months ago. The news of the then liberation of Palmyra by Syria and its ally Russia was much more accepted, transmitted and exceeded much more to the news of the liberation and reconquest… Read more »

The value is remoteness, food, oil and on the way to Deir Azoor. Antiques to steal and sell. Propaganda site to attract jihadi tourists?

@Janjak Desalin 1804 I disagree with no strategic value. Resources like oil have value for wars. If You look at a map of oil and gas facilities in Syria. You will find that the Palmyra area has value next only to Deir Ezoor. I posted the following quote AFAIR on the 12.12.16 in answer to a post of Daeshbags Sux. Some claim – US / Kurds stopped in Raqqa to give IS time to regroup. Value of Deir ez-Zor as retreat was claimed by WSJ 02.12.16 or so. Beginn Quote @Daeshbags. Interesting insights & approach. I looked at it with… Read more »

Agree, oil has high value for every side.

Absolutely, in fact, the region has great interest. And well, such offensive can also be of great interest to do serious scores against them : Frankly, I’d fucking never would move any armoured column etc in a desert unless I have air superiority assured (or under a sand storm). And well, not better do a siege in a desert area without such condition : It’s fucking turkey shooting for airdrafts : hey : just a single coalition raid, 14 tanks, 3 howitzers, 2 buildings, 3 technicals and an AA-gun! The gear captured in Palmyra ends being no gain! Thus, due… Read more »

Yes. When they planes find You – a desert is an open place. ROFL. Yes seen Your post about the air attack. I was most surprised that the US “changed sides” to help out for SAA.

No idea how effective You can patrol to find. In North Africa forces have not been very effective at that – IMHO.

Heliborne assault : best way to have few troops, have losses (easy to down). Only really good to move small groups of SOFs. Many copied it on USMC, same for LHDs but well, what interest for beach assault? Not used once since Korea War! Bad tactics because USMC too lazy or fearful to learn to be parachuted! Paratroopers : you can land 2000 in a few minutes and also drop tanks and APCs in numbers… Much less risks of being downed too. Victory : cutting ANY supply smuggling into Syria from Iraq on south, Lebanon on west and Turkey on… Read more »

Provides all cut their interests & supply no more.

I understand that not everyone is an expert reader. However my statement was that “palmyra really has no strategic value, RIGHT NOW!”; the qualifying clause is significant. It is a fundamental axiom of warfare to never reinforce a failure. Repeatedly committing forces to Palmyra, after having twice lost it, maintains the SAAF in a reactionary pattern regarding ISIS and distracts from the primary objective of defeating the US-Anglo/Euro-Zio backed “moderate” terrorists and regaining control of M5. ISIS is a secondary, or even a tertiary concern. ISIS didn’t start the mess in Syria,Twitter did! ISIS is a symptom; the US-Anglo/Euro-Zio backed… Read more »

What Brave men, they truly deserve our admiration for their sacrifices, Syrians gave demonstration to the entire world, when you have “A Just Cause” you will defeat the most armies, thermo nuclear weapons, atomic or whatever if the whole world combined, and you can never be defeated, that is Devine rule of creation. Bravo to Syria, Russia, Iran, Hizbollah, China, Iraq, and all true faithful friends and partners of Syria! An if Assad is a Dictator, fighting to liberate his country, and his nation from an eminent subjection to Imperialustic Misadventures, at the Top Vanguard Inc, Exxon, BP and Gulf… Read more » 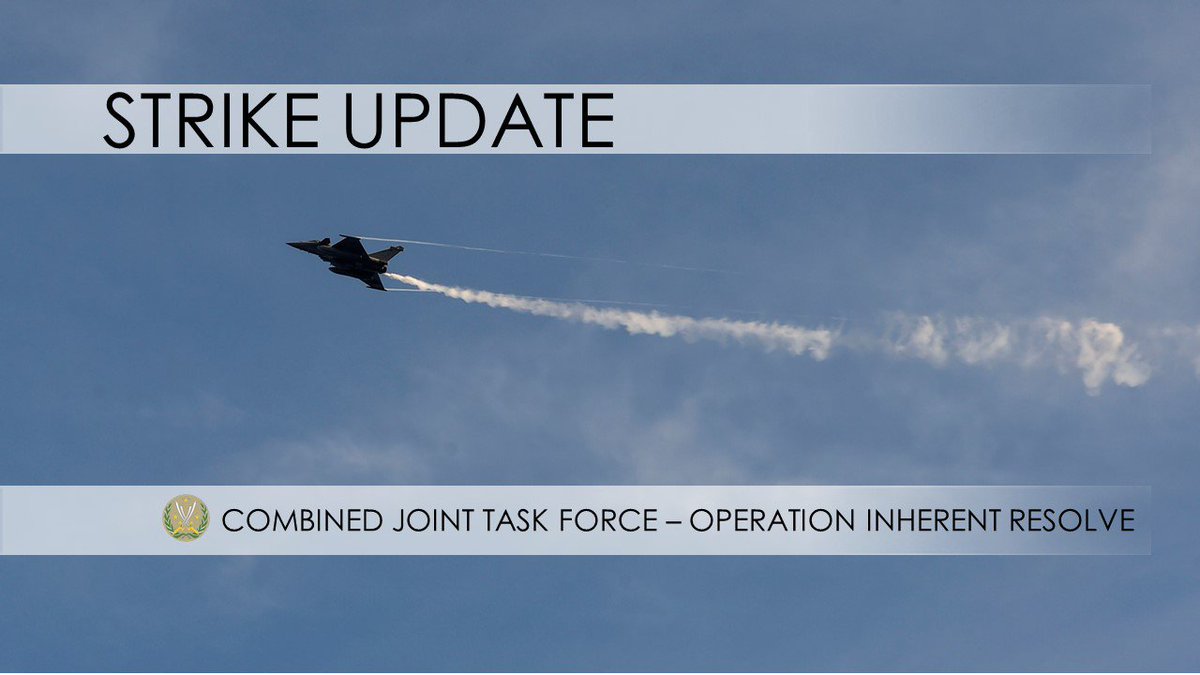 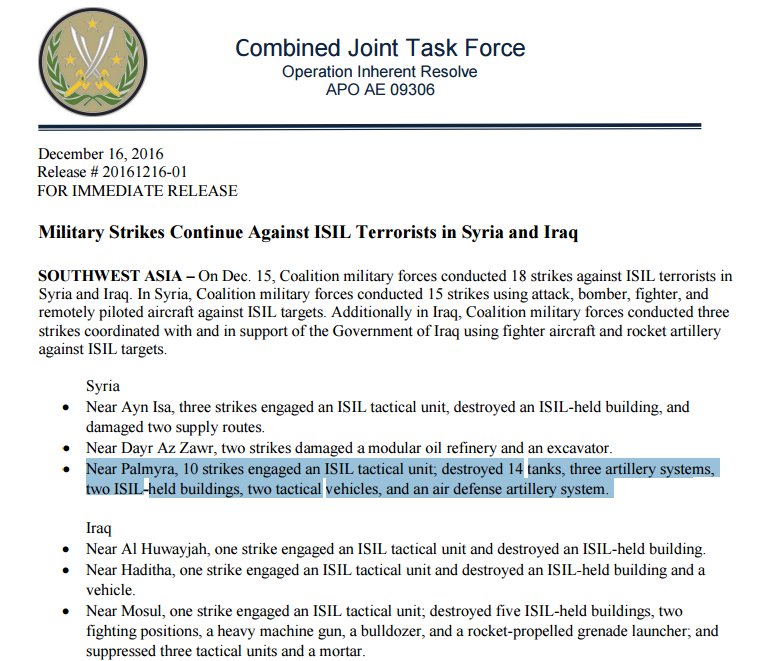 One thumbdowner may not having understood that coalition steamrolled over Daesh and fucked up the gear they seized from SAA, thus preventing them to use it in the future, LOL

france did these airstrikes near palmyra? i’m wrong, our high-treaturous government is not by Syria’s side since the beginning!
what aircraft is it on the picture?