At least 1 civilian was killed, 15 others injured as shells filled with poisonous gas fired from rebel-held areas hit al-Hamdaniya district in western Aleppo.

Medical sources at Al Razi Hospital said that up to 15 people have been admitted for having breathing difficulties, vomiting and muscle spasms; which largely suggest a gas attack.

All the injured are civilians, the sources confirmed.

Jihadi groups have recently captured several locations from the government forces in bid to lift the siege on the city’s east.

It’s a good sign! Rebels terrorist usually use such despicable tactics when they are loosing on the battlefield…

what about chlorine choppers lol

You’d need to drop a full tank-truck of chlorine to be sure to kill people… Only the B-1B can carry such quantity (57 tons payload). Then, it’s very easy to protect yourself against chlorine! Just need swimming goggles and a thick cloth you ply in several layers imbibed preferably with liquid bicarbonate BUT urine or even water will chemically react too… In fact, the canisters of chlorine that were used by the so-called rebels were thrown by the so-called rebels with their “h**l-canons”, replacing the habitual butane cannister by Cl2 you’d use for a swimming pool! It’s not even the… Read more »

No guys lets be honest dont down vote ( some_dude ) coz i have ikhbariya al surieh and its guvernment related channel and they said that all casualties are militarily and none civilians …. i trust masdar news but this statement put me to question this site !

This is a video that show us the patients
https://youtu.be/_UUwIfRmTrg

Video proved and sealed the case. Al-masdar is lying

And i forget to tell that the video said that 25 cases has been registered instead of 15 and ( none death ) …… but masdar tell at least 1 civ. Died …….
COME ON MASDAR WE ARE WITH YOU BUT DONT TELL THIS TO US …… MAY SAA WIN BUT WITHOUT PROPAGANDA PLEEASEE !
But lets be honest with this too that every party use their best to ensure that they are winning even if they are good side !! This is War
f**k WARS

Bullshit. If govt wanted to use chemical agents, they wouldn’t have surrendered all their Sarin to UN! Chlorine is stupid! It’s just in the WMD list as it was used during WW1, although fastly replaced by mustard gas. It’s just an incapacitating gas and for such purposes, BS or CS tear-gas riot cops use are MUCH more efficient AND legal…

this guy on the pic is civilian LOL or maybe no military causalties cause they knew regime chopers will drop chlorin gas so they had their masks ready? keep up the propaganda al-masdar you are giving us a good laugh

Indeed, I quote: “All the injured are civilians, the sources confirmed.”, but why do we see a soldier in the picture attached?

Doctor in the video says:’The victims are soldiers but there are also civilians among them.’ source:https://www.rt.com/news/364737-syria-aleppo-poison-gas/

So called rebels have choppers too : 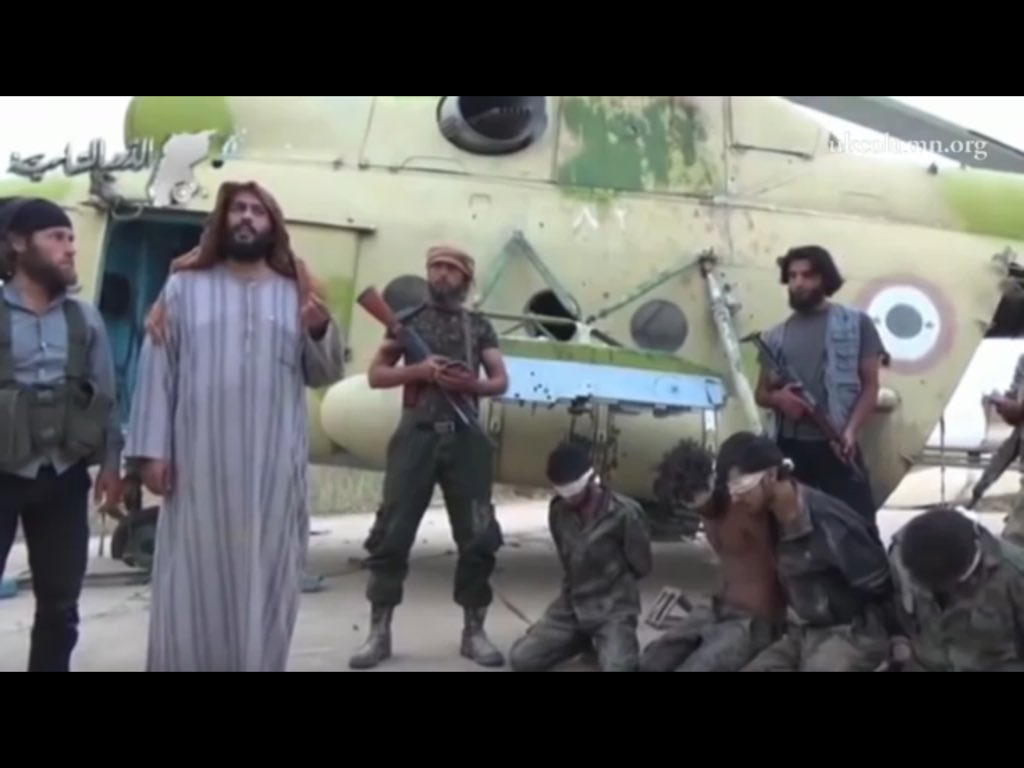 But they have more head choppers :

Here are the infamous US-vetted al-Zinki before beheading the kid you see. They said : “We are even worst than ISIS”. I have no problems to believe it, for once they weren’t lying.

hahhaa dont make me laugh. Rebel chopper above Aleppo amongst all that RU airpower? l**o, you can find something better, try hard ! LOL

Nope, this one is known to have dropped barrel bombs against civilian around N-Hama.
In Aleppo, they simply use h**l-canons to send Cl2 cannisters… Thus, Jaysh-al-Islam shot sarin and chlorine shells against Aleppo kurdish area a few months ago.

Rebels? What rebels? All are barking aloha-snackbar! They are shithadists! Shithad killed even more people than Nazis! In India alone they assassinated about 300M people over several centuries! The total number of people assassinated since 610AD is estimated between 550M and 800M. Jihad is the biggest crime against humanity!

Rebels only have grounded chopper.

The attack was aimed at the military academy, against govt troops. Very dubious SyAAF targetting their own forces… Stills ZERO proof the government used poison gas, as al-Nusra used Sarin from LIBYAN arsenal (proved by UN experts!) for the infamous 2013 Goutha massacre and Jaysh-al-Islam used Sarin in shells against the Aleppo Kurdis civilians. BTW chlorine has very very few tactical interest : the killed one was probably killd by the explosion of the shell : at best, chlorine is just a little more powerful than BS/CS tear gas the riot-cops use : it’s mostly an incapacitating gas : you… Read more »

lets say we believe you. tell us then why is Al masdar lying about civilians? Video proves they are lying.

Because al masdar lie everytime like russian media. I support the saa but I’m not blind

ABOUT US
Al-Masdar Al-'Arabi (The Arab Source / المصدر نيوز) is dedicated to providing the latest news and analysis from the Arab world.
Contact us: [email protected]
FOLLOW US
© Copyright 2014 - 2018 Al Masdar News | المصدر نيوز - All Rights Reserved | Cloud by Epic
wpDiscuz
23
0
Would love your thoughts, please comment.x
()
x
| Reply
You are going to send email to
Move Comment
Translate into
AfrikaansAlbanianArabicArmenianAzerbaijanBasqueBelarusianBosnianBulgarianCatalanChineseCroatianCzechDanishDutchEnglishEstonianFinishFrenchGalicianGeorgianGermanGreekHaitian(Creole)HungarianIcelandicIndonesianIrishItalianJapaneseKazakhKoreanKyrgyzLatinLatvianLithuanianMacedonianMalagasyMalayMalteseMongolianNorwegianPersianPolishPortugueseRomanianRussianSerbianSlovakianSlovenianSpanishSwahiliSwedishTagalogTajikTatarThaiTurkishUkrainianUzbekVietnameseWelshYiddish