Libyan Army showcases military might during parade: photos and video

Russian intervention is not needed, Armenia can defend itself: president

BEIRUT, LEBANON (7:05 P.M.) – The U.S. Coalition reportedly carried out a lethal series of airstrikes over the Idlib countryside on Tuesday, killing and wounding scores of jihadist rebels near the Turkish border-crossing.

The primary target was a Jabhat Fateh Al-Sham (formerly Al-Nusra Front) base located near the town of Sarmada that had several members of this jihadist organization inside at the time of impact.

According to the reports released by activists in social media, about 25-30 people were killed as a result of these airstrikes. Although coalition airforce allegedly targeted JFS militants, there was unconfirmed information about several prisoners captured by jihadists among victims of the aforementioned attack.

The base of Jabhat Fateh Al-Sham was attacked two days after coalition UAV hit in the same area a car with several prominent field commanders of this organization inside.

mmmmm, What has bought about this change in US targeting I wonder ?

Did they even hit the intended target 🙂

“What has bought about this change in US targeting I wonder ?”
BARRACK HUSSEIN Obama is going, Huma Abedin is unemployed and Killary that Huma owned ain’t on GCC payroll anymore and even if not showed publicly, many many many in the EU are furious about the s**t they have done together with Erdogan and some GCC kinglets… 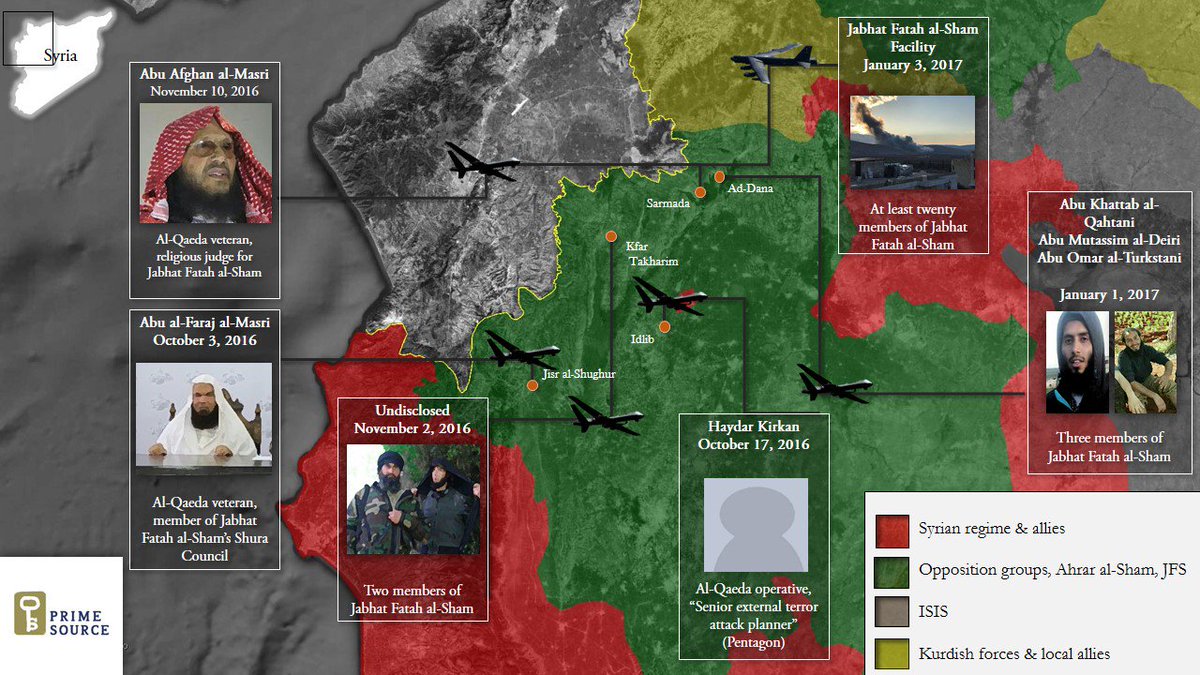 Cleanup before exit… Usual business of the sponsor getting rid of the contractor once the mission is finished or compromised.

Video of the mushroom : https://www.youtube.com/watch?v=XaDjdmffp9Y&feature=youtu.be Visibly, it’s the 1st time THIS : is used in the area! The target was JFS MAIN HQ during a meeting! Well, seems an uninvited guest came… In a B-52! http://en.eldorar.com/node/4290 Without waiting for more info than having learnt about the strike, Jihadi-Julian concluded : #AssadPutin airstrike, All civilians 😉 “What has bought about this change in US targeting I wonder ?” => 1. Trump is coming. 2. Many of the now high ranking officers have enlisted after WTC or not so long before. If Barrack Hussein Obama wants to spare jihadists, I doubt… Read more »

Reaper drone filmed around :
https://www.youtube.com/watch?v=6kNx05uwvXQ&feature=youtu.be
Just better know : usually, these drones do not fly so low except for one reason : it’s a way to say “Look! We are here! We’re coming for you!”

Photos are amazing, but it’s a fake, because social media reports claims that US airstrike killed 25 civilians and wounded over 14 in Sarmada town